ALLIANZ TRADE: Eurozone inflation: How bad can it get?

The Eurozone is facing the highest price pressures since the 1970s, a recent study released by Allianz Trade shows. Headline inflation reached 7.5% y/y in April (up from 7.4% y/y in March), with almost 60% explained by energy inflation. Europe has been hit particularly hard, given its stronger reliance on energy imports and the recent depreciation of the euro to a five-year low against the US dollar. How bad can it get?

Aside from pandemic-related base and one-off effects, the surge is largely due to the combination of a strong re-opening momentum and snarled-up supply chains as the fragile global production and distribution system failed to keep up with post-pandemic demand, especially for goods. Russia's war with Ukraine has further exacerbated inflation dynamics, driven above all by a sharp increase in commodity prices - notably for energy. More recently, China's zero-Covid policy and the related lockdowns of important industrial centers have put additional strain on supply chains, which threatens to keep shipping costs and producer prices higher for longer.

Rising energy prices will continue to drive inflation dynamics this year, causing headline inflation to remain substantially higher than core inflation. The situation should reverse only in H1 2023 once negative base effects kick-in more forcefully (Figure 1). In the past, the energy component used to be largely explained by the oil price and the EUR-USD exchange rate. However, following Russia's invasion of Ukraine and the resulting energy price shock, the role of the gas component in explaining energy inflation has risen to around 30%. Historically, core inflation accounted for 55% of consumer price increases in the period between 2001 and 2021. 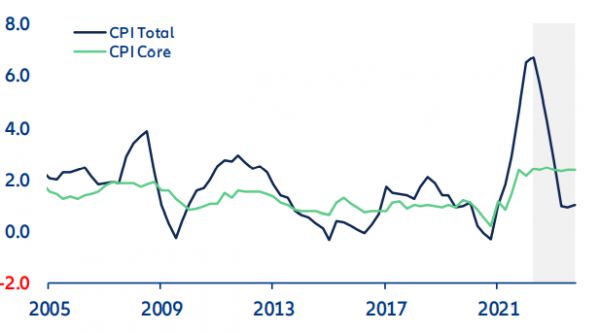 Given the key role of energy prices in the current dynamics of inflation, analysts simulate different price scenarios and analyze their impact on total inflation (Figure 2). In line with the benchmark oil and gas forecasts, which exclude the EU embargo on Russian oil and gas imports, headline inflation is expected to peak in the second quarter of this year. This result would be maintained even if energy prices remain constant at current levels until the end of next year. However, oil and gas prices are expected to fall in the absence of further political escalation. For this year, a 5% increase in energy prices is expected in each quarter so that inflation will remain above 3% next year. 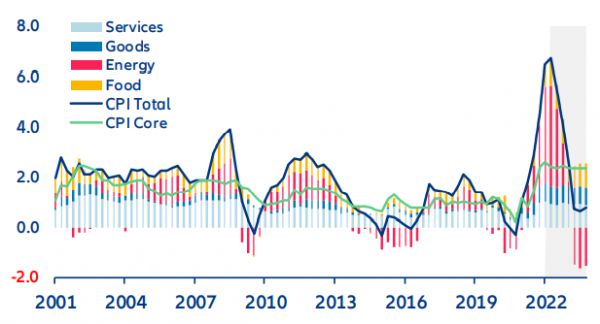 Sources: Refinitiv, Allianz Research. Note: */ includes the energy component with oil prices and natural gas; the variable selection for the services and goods component models does not vary with the estimation horizon (Q1 2020 and Q4 2021)

How should the ECB react? The next few months will be critical, especially when the ECB presents its latest macroeconomic projections at the June and September policy meetings. Higher inflation and lower growth impose hard policy trade-offs in a world where classic aggregate demand support has little impact amid strong cost-push pressures causing negative supply shocks. The disappointing Q1 GDP performance across the Eurozone underlines the economic costs of the war in Ukraine as well as the heightened risk of a stagflation scenario.

Overall, we expect Eurozone inflation to register at 6.5% in 2022 and 2.5% in 2023, with core inflation settling at 3.0% and 2.5%, respectively. Notably, the jump in food inflation in the recent April inflation release could be troublesome, given its strong impact on households' inflation expectations. We expect economic growth to evolve below consensus this year and especially next year, which should also put a dampener on wage pressures and support a more dovish stance (with a first rate hike only expected in September). A sharper slowdown in growth or the potential for fragmentation due to sovereign stresses could lead to a slower policy normalization.

The war in Ukraine and new lockdowns in China are bringing back the "whatever it takes" wild card: The return of strong state support to shield companies could delay the full normalization of business insolvencies once again. After the "grand reopening" in 2021, governments gradually eased state support measures, setting the stage for the return of business insolvencies, which picked up speed in Q1 2022. However, companies now face multiple global headwinds once again, from extended supply-chain disruptions and transportation bottlenecks to shortages and high input costs, notably for energy and commodities. They also face higher funding costs as the global surge in inflation accelerates monetary tightening. In response, governments in France, Germany and Italy have already extended existing partial unemployment programs and introduced new forms of state-guaranteed loans, with more measures likely the longer this crisis lasts.

Overall, the analysts expect states support will keep insolvencies artificially low in France and Germany in 2022, but the UK could see a sharp rebound in 2022, while Africa and Central and Eastern Europe will both reach new record highs. At the same time, despite differences between countries, Western Europe could approach its pre-pandemic level of insolvencies by 2023: We expect another increase, in Italy and Spain, albeit weaker than in 2021, (+6% to 8,990 insolvencies and +8% to 5,550 cases, respectively). In the UK, insolvencies could rise by +37% y/y to 22,305 cases, but extended support measures will keep them lower in France (32,510) and Germany (14,600). In Asia, China should be able to maintain insolvencies in check but other countries could see an increase due to the deterioration of the regional and global environment. In contrast, companies in the US (15,500 cases in 2022) should benefit from the buffers accumulated since the pandemic, helped by the Paycheck Protection Program being massively transformed into subsidies and the recovery in profits. Overall, in this baseline scenario, one out of three countries (15) would see their number of insolvencies back to pre-pandemic levels in 2022, and one out of two in 2023.

"Romania could not get out of the general trend of rising inflation globally. Of course, the level of almost 14% recorded in April places us among the top countries in Europe and explains the recent increase in monetary policy interest rate to 3.75%, future increases being very likely this year to establish the inflationary momentum. Although it is fluctuating (+ 14% at three months and + 22% at two months in 2022 compared to the same period last year), the evolution of the number of insolvencies among local companies confirms the depreciation of macroeconomic indicators. If in the case of construction and industry the inherent volatility of projects coupled with rising commodity prices and labor shortages are generally the disruptive factors of recent years, the situation is more nuanced in the case of consumption. Expectations remain for a more moderate rise in inflation in the second half of the year (towards 10%) as the energy shock will be reduced and interest rate increases will materialize in the reduction of the money supply. However, we remain in an area of high uncertainty in the context of the continuing armed conflict, in which expectations of calming inflation and the return of economic growth are constantly postponed, "said Mihai Chipirliu, CFA Risk Director, Allianz Trade

In Romania, among the sectors with the most frequent increases in the number of insolvencies are, somewhat similar to last year, the field of wholesale and retail trade (25% of the total every three months), construction (19%), but also the manufacturing industry. (12%) respectively transport and storage (9%) and horeca (9%). Rising inflation and related interest rate increases are also beginning to have an impact on private consumption, a key component of economic growth in previous years. The effects are seen either by changing the structure of consumption (predilection for cheaper products and / or streamlining consumer behavior), and in the case of increases based on interest-bearing debt, by postponing investment decisions. 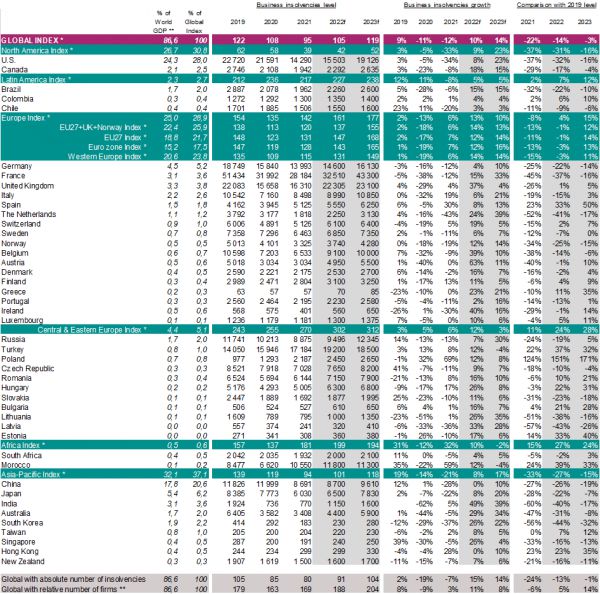 We predict trade and credit risk today, so companies can have confidence in tomorrow

Allianz Trade is the global leader in trade credit insurance and a recognized specialist in the areas of surety, collections, structured trade credit and political risk. Our proprietary intelligence network analyses daily changes in +80 million corporates solvency. We give companies the confidence to trade by securing their payments. We compensate your company in the event of a bad debt, but more importantly, we help you avoid bad debt in the first place. Whenever we provide trade credit insurance or other finance solutions, our priority is predictive protection. But, when the unexpected arrives, our AA credit rating means we have the resources, backed by Allianz to provide compensation to maintain your business. Headquartered in Paris, Allianz Trade is present in 52 countries with 5,500 employees. In 2021, our consolidated turnover was EUR 2.9 billion and insured global business transactions represented EUR 931 billion in exposure. For more information, please visit allianz-trade.com

Marsh and Microsoft launch the 2022 Cyber Risk Survey, the third study dedicated to the cyber risks' evolution across the global economy

Finaccord: the shift to digital is likely to last in the insurance distribution

Bosnia and Herzegovina: ASA and Central Insurance to become a leader in the insurance market after merging

UZBEKISTAN: expanding the classifier of insurance activities to contribute to the creation of new insurance types and improve the living standards of the population

Hungary: Ex-Aegon units continues their activity under a new name