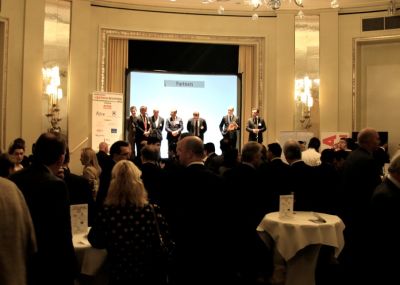 On October 23rd, we've met for the third time our readers in Baden-Baden, on the occasion of the third edition of Baden-Baden XPRIMM Reception. Over 250 professionals from the re/insurance companies all over the world took advantage, on October 23rd, of the opportunity to be the first readers of the autumn edition of XPRIMM INSURANCE REPORT, the publication which brings together the insurance statistics of the CEE and CIS regions for 1H 2011.

The XPRIMM soiree came into prominence during the last three years as a pleasant and valuable prologue to the busy days of the Baden-Baden Meeting. Beside its natural role of promoting the Romanian insurance industry, the 2011 edition also brought in the limelight a very interesting emerging market of the CIS space: the Azerbaijani insurance market. Represented by a large delegation of insurers, the Azeri market also promoted its results and business opportunities through the INSURANCE Profile's special edition - AZERBAIJAN 1H 2011, edited by Media XPRIMM.

Exclusive information and rich networking opportunities - this was the promise carried out by the XPRIMM Reception. On behalf of the Media XPRIMM team and its guests in Baden-Baden, it is our pleasure and duty to give thanks to the event's partners: Inclusive Insurance in the CEET Region - Challenges and Potential Opportunities