However, as information provided by CAP - the Czech Insurers Association show, the most serious natural disasters occurred just before the end of the first half of the year, which means that 1H data only provide for a first glimpse in the weather-related events impact, while the total extent of the insured losses may be only assessed by the end of the year, once the indemnifying process will approach its end. The tornado in southern Moravia at the end of June, together with other damage from hail, floods and heavy rains in the following period had already a visible impact on the insurers' claims expenses. Jaroslav Urban, analyst at CAP, states: "The quarterly statistics on damages that occurred and were reported by 30 June 2021 provide a comprehensive view of the damage caused by hail. Their total number in the first half of the year increased by 92% and reached the value of 6,163 compared to 3,213 insurance events that occurred a year earlier. The related volume of claims has so far reached CZK 433 million, which represents a 37% increase compared to last year's CZK 317 million. "

The most frequent occurring insured events, which in the case of property insurance represent water damage, stabilized year-on-year, and at the same time they are at the level of approx. 21.9 thousand cases. However, their total volume increased from CZK 588 million in the first half of 2020 to the current CZK 622 million, which corresponds to an increase of 5.9%. The related average water damage increased from last year's CZK 26,874 to the current CZK 28,406.

By the end of July CAP has published a series of estimates of the losses caused by several weather events, as follows:

Estimate of the amount of damage caused by a tornado:

Average damage caused by a tornado:

Estimation of the total amount of insurance indemnity 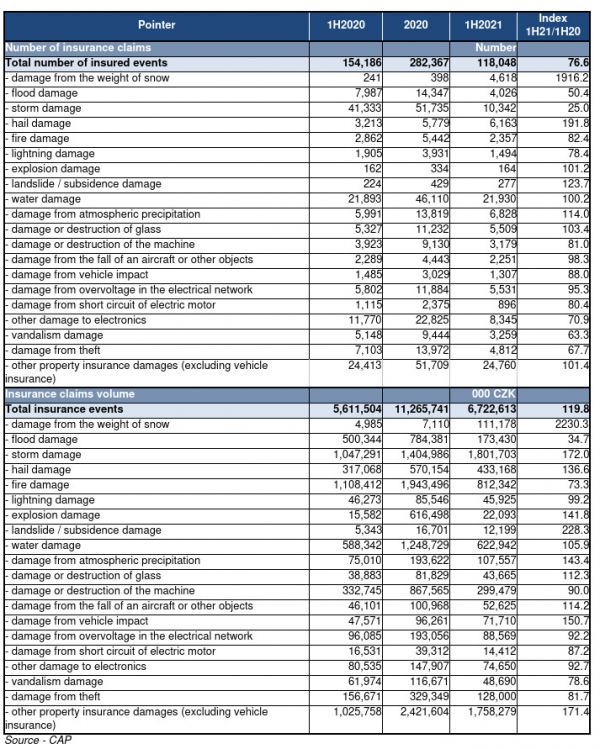 Czechia based broker RENOMIA enters Poland, expanding its footprint in the CEE

Bosnia and Herzegovina: charter capital of insurance companies has increased