28 March 2019 — Adina TUDOR
Insurance pioneers from all continents connect and get inspired, between 25 and 27 June 2019, at DIA Amsterdam 2019. The event, supported by XPRIMM Publications as Media Partner, brings into debate the future of insurance.

Tickets are still available. XPRIMM Readers get a 200 euro if they use the discount codeDIA200XPRIMM. Just click here to register.

One of the keynote speakers participating this year at the event is Jonathan LARSEN, Ping An's Chief Innovation Officer. Ping An is the most innovative financial group in China and one of the largest insurance companies in the world. When it comes to a successful ecosystem strategy, Ping An provides, without any doubt, one of the worldwide best practice.

Jonathan LARSEN shares some of the vision and learnings behind the success in an interview, taken by Roger PEVERELLI and Reggy de FENIKS. Jonathan is responsible for bringing new technologies, platforms and business models to Ping An's businesses in China and internationally. He is also the chairman and CEO of the Ping An Global Voyager fund, a one billion dollar fund which invests in fintech and health tech opportunities.

Q: Jonathan, can you share some of the history of Ping An, and how the company succeeded in this tremendous growth?

Jonathan LARSEN: "Ping An was founded by Peter Ma in 1988. Peter, who still is the chairman and the CEO of the company today, has provided the guiding vision for the company's development. Ping An started as an insurance business, diversified into a wide range of financial services, and created the concept, which was revolutionary in China, of integrated finance. To this day, Ping An has still the widest range of licenses of any financial institution. Fast forward to the 2007-2008 period, when most of the world was focussing on the financial crisis. Peter Ma was observing how Alibaba and Tencent were rapidly creating what essentially became a new digital economy in China. Having built Ping An as a traditional set of financial businesses, he realised that there was an entirely new set of challenges and opportunities emerging in the digital economy. And so he decided to pivot the whole company to being a technology-led company."

Q: That is quite a challenge. You probably didn't do that overnight ...

J. L.: "True. The first thing was to go all-cloud, which has been achieved. This involved replacing all legacy platforms across the company. Ping An also launched a large, technology-led, R&D effort. Examples include: automated underwriting, facial recognition platforms for client authenticated; we built our own voice print technology. We've taken all of our calls, the million calls a day that we still get, and turned them into text to make them machine processable. 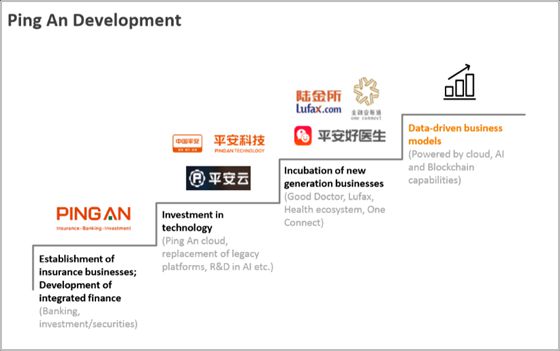 We also created many new businesses. Lufax, Good Doctor, OneConnect are good examples. There are probably 15 more companies at various stages of development, in different sectors, building on our financial and broader ecosystems."


Q: Such a transformation is a real achievement. What is, in your view, the key success factor for accomplishing such a change?

J. L.: "It is important to grasp how Peter and the company look at the future. On one hand, he believes the advent of digital economy is rendering the capabilities that have made us successful in the past, 1.4 million insurance agents, a great brand, a lot of capital, less and less relevant - although these are, of course, critical to our business in the near term. On the other, our ability to access data, to be able to make great value out of data to serve client needs is going to become more relevant. That insight is powering all of our strategies going forward."

Q: The success of Alibaba and Tencent sort of showed how the insurance game is going to evolve ...

J. L.: "It's one thing to be a major and an innovative financial institution today. But I think we have to recognise a lot of innovation is being driven from outside of the financial industry. 30 years ago, most innovations were initiated by the industry, by a small number of large players, and also by a small number of technology vendors. That has completely changed. Today most innovation is coming really from the outside-in. As an example, we are now seeing about $30 bn a year in investment from venture capital in Fintech."

Q: In your view, what does the landscape currently look like? Is China leading the way? 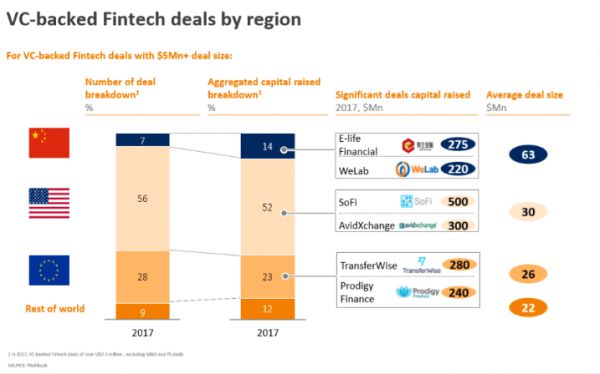 J. L.: "It's actually increasingly distributed across the world. China is an important player. Three areas in China have been transformed by technology. Firstly payments. Cash doesn't really exist in China anymore, because of the penetration of e-wallets. Secondly, the wealth intermediation industry is now largely dominated by digital platforms. Thirdly, the same has happened to the personal lending industry. We've seen similar trends in other parts of the world. I think they are also a very important set of trends in Europe, as fintech is beginning to come of age. We certainly see Europe as a very important source of innovation and an opportunity space for investment."


Q: It seems that fintech is dissolving finance ...


J. L.: "When we look at the world there's a lot of players out there. We count at least 7,500 fintechs. We also look intensively at the digital health landscape and we see about 7,500 in that universe as well. If you decompose finance, you can find actually pretty good companies in every segment and every component of the value chain. However, many of these companies have yet to scale. The industry is still very much dominated by large scale legacy providers, both financial institutions and vendors. The question is, how will that change and how quickly?"

Q: You mentioned how Peter Ma was observing how Alibaba and Tencent, and many others probably, had created essentially a new digital economy. What new paradigms can be derived from that?

J. L.: "We believe there are a number of important ways in which the internet economy has proven to be transformative in the last 15 years. The first is redefining addressable markets. Think of when Travis Kalanick created Uber. What was he competing against? The yellow cabs in San Francisco? No, he was actually addressing mobility for everybody, everywhere; as were the guys at Airbnb. The second is turning data into value, which is the model of Google and Facebook. Together they represent 66% of the global monetisation of data, so they really are the examples par excellence. Redefining user experiences is the third vector. You need to look no further than Netflix and Spotify, for completely changing a traditional set of experiences. The fourth is facilitating radical automation. Think of Amazon's warehouse infrastructure. Toyota is probably the standout example for manufacturing, innovation and automation. The last one is the ability to use technology to access a wide range of capabilities through ecosystems. Salesforce is a great example, as is Android. All these new vectors entirely come from outside of the financial industry." 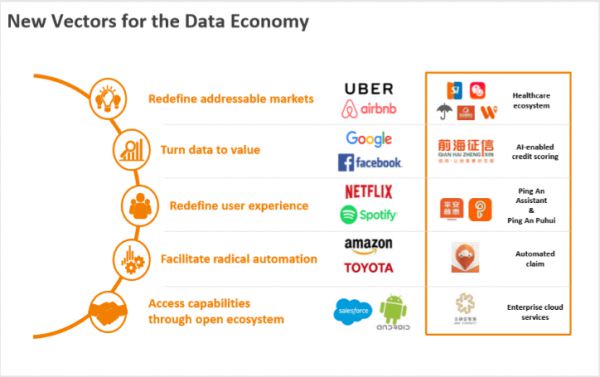 Q: So how does that reflect in the strategy of Ping An?

J. L.: "Sure. Ping An owns the largest car trading website in China. We acquired a 54% interest in AutoHome about two years ago. It's a NASDAQ listed company. Since then it has quadrupled in value, and is now valued at $8 billion. AutoHome handles 30% of all car sales in China, the largest car market in the world. After the acquisition, the first thing we did was find ways of embedding financial services into their offering. For cars the most obvious are financing and insurance. So we figured out how to do that on a very large scale. And then secondly, what we wanted to do is create a data layer underneath it and be able to monetise that data for research purposes for OEMs, but also for adding value to consumers themselves."

This is the end of part 1 of the interview.

Ping An is the most valuable insurance group worldwide. For the first half of 2018, their premium income was about 60 billion dollars. The company is a leader in life and general insurance in China. It has a securities business with the largest retail online broker in China, an asset management business with around $700 billion in AUM, and a bank with a balance sheet of about half a trillion USD. In addition, it has a range of new businesses evolved from their 'technology ecosystem'. In the first half of 2018 Ping An generated 85 billion USD of revenue and a net income of 9 billion USD.

Christos Adamantiadis is the new CEO for Continental Europe at Marsh

Generali confirmed among the most transparent companies in digital communication