In terms of PC, the overall market recorded an increase of EUR 36 million (+35.5%). While GWP rose constantly and almost linearly on all main insurance lines, PC evolution was more turbulent; in 2014 a spike due to an increase of EUR 19 million in property claims' level was recorded. 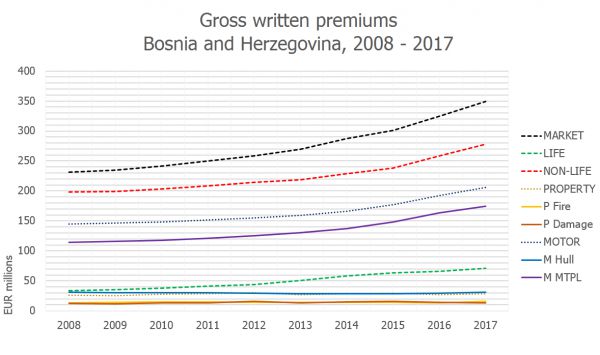 The Bosnian market was largely dependent on the MTPL line. It can be said that MTPL shaped the whole Bosnian market evolution. In total GWP, MTPL represented 47.7-50.3%. MTPL's PC kept a lower share in the market, between 37.9-47.5%, representing about a third of its GWP's volume.

New leadership team at the insurers' association of Bosnia and Herzegovina

BiH: introducing a form of compulsory insurance for residential buildings is under consideration

UKRAINE: Insurers' total operating expenses amounted to 50% GWP at the end of 2019

TUW PZUW is the mutual insurance market leader in Poland, with record results in 2019