19 December 2019 — Daniela GHETU
Secondary perils' share in the total economic losses from natural disasters is increasing, Swiss Re Institute's report Insurance in a world of climate extremes shows. While 2019 was, overall, a "calmer" year in Nat Cat terms, as compared with the previous year and the last decade's average indicators, losses produced by less spectacular, but more frequent events are increasing.

Total economic losses from natural and man-made catastrophes fell to around USD 140 billion in 2019 from USD 176 billion last year, according to preliminary sigma estimates from Swiss Re Institute. Global insured losses are estimated to be around USD 56 billion, down from USD 93 billion in 2018 and below the annual average (USD 75 billion) of the previous 10 years. Tropical cyclone activity in the second half of 2019 pushed overall insurance losses higher after a benign first-half of the year. And, as in recent years, a number of smaller and mid-sized loss-generating disaster events (so-called secondary perils) accounted for more than 50% of the insured losses. Globally, more than 11 000 people have died or gone missing in disaster events in 2019.

Tropical cyclones inflicted devastation in different parts of the world. In the first half of the year, cyclones Idai and Kenneth in Mozambique and neighboring countries, and Cyclone Fani in India, left trails of destruction and suffering to local communities. Sadly, the events claimed around 1 400 victims. Insured claims were very low given the low insurance penetration in the impacted regions.

In the second half of 2019, the Bahamas and North Carolina in the US were hit by Hurricane Dorian, which caused insured losses of about USD 4.5 billion. Japan was hit by two devastating typhoons within a short period. In mid-September, Typhoon Faxai hit the Kanto region that includes the Greater Tokyo Area, with associated insured losses estimated to be approximately USD 7 billion. Soon after, in early October Typhoon Hagibis struck the same region, causing further widespread damage across Japan. Total insured losses from Hagibis are estimated to be around USD 8 billion.

After some years of relative calm, the experience of the last two years reaffirms that typhoon risk remains a major vulnerability for Japan. Faxai and Hagibis followed Typhoon Jebi in 2018, which resulted in substantial insurance losses of close to USD 13 billion. This year's typhoons further underscore the high exposure of urban regions in Japan to both typhoon wind and flood risks, in spite of the presence of mitigation infrastructure. While climate change cannot be ruled out as an amplifying risk factor, it is certain that the last three events confirm the historical pattern of devastating Japanese typhoons in the middle of the 20th century.
Secondary perils devastating as ever: climate change taking its toll

This year also saw heatwaves and dry spells, with new temperature highs recorded in several locations around the world, from Europe to Australia. Devastating wildfires affected Australia, Indonesia, the US, Canada, the Amazon region and Siberia, among others.

Once again, there were devastating floods in many regions in 2019. Severe monsoon rains led to extensive flooding in India, Bangladesh and Nepal, and there were repeated flood events in other regions, including China, the US, Europe, Canada and Australia. Thunderstorms and hailstorms have caused damage to property, vehicles and agriculture in many parts of the world. Together, secondary perils are estimated to comprise more than 50% of this year's global insured losses from natural catastrophes, demonstrating once again the very significant impact these events can inflict on societies.

Climate change is leading to more frequent and more severe secondary peril events, which manifest in different ways: more local flooding, torrential rains, prolonged drought, severe wildfires and other extreme weather events. The Swiss Re Institute's report Insurance in a world of climate extremes: what latest science tells us suggests a more differentiated picture on the impact of climate change on the insurance industry.

"There is more scientific evidence that climate change impacts the frequency and severity of secondary peril events today, warranting more focus for research. For primary perils like typhoons, science is far less conclusive", says Martin Bertogg, Head Catastrophe Perils at the Swiss Re Institute. "In addition, macro risk factors like rapidly growing populations and property values in exposed areas contribute to the increase in losses resulting from natural catastrophes globally, making past experience a less definite predictor for future losses."

The loss estimates in this media release are preliminary and may be subject to change, as not all loss-generating events have been fully assessed yet. 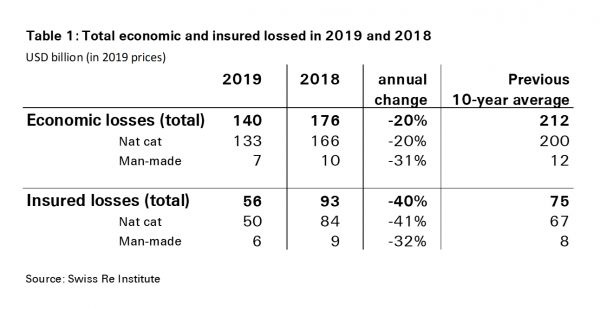 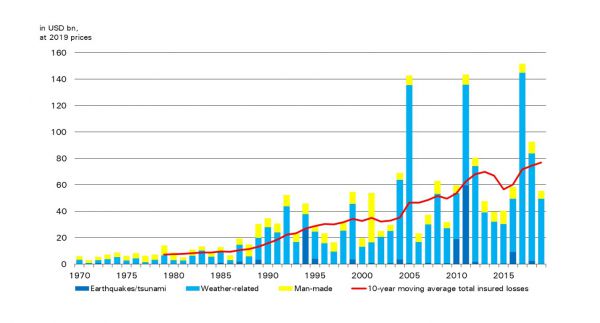 Connected houses - the shift from financial support to risk prevention, under debate in Vienna

STATISTICS: ESTONIA, FY2019: Insurance market compressed by more than 10% due to decreases reported on non-life subclasses

UKRAINE: 57 insurance companies and 7 insurance brokers left the market in 2019