The latest sigma "Natural catastrophes in times of economic accumulation and climate change" says that Swiss Re Institute expects that global warming will lead to growing intensity and frequency of severe weather events, but also to more uncertainty in their assessment. Economic and insured losses resulting from such events will rise in the coming decades, and this presents a major threat to global resilience. Worldwide, economic losses from natural and man-made disasters in 2019 were USD 146 billion, lower than USD 176 billion in 2018 and the previous 10-year annual average of USD 212 billion. The global insurance industry covered USD 60 billion of the losses, compared with USD 93 billion in 2018 and USD 75 billion on average in the previous 10 years. While severe weather events were still the main driver of overall losses in 2019, amplified by socio-economic developments in affected areas and climate-change effects, the decrease in losses primarily stem from the absence of large and costly hurricanes in the US.

"Economic development and ever-increasing population concentration in urban centers, alongside changes in climate, will continue to increase losses due to weather events in the future," said Edouard SCHMID, Chairman of the Swiss Re Institute and Group Chief Underwriting Officer at Swiss Re. "Our industry can play a key role by partnering with clients and governments to develop scalable solutions that support the transition to a low-carbon world by managing risks associated with renewable energy projects and making these more attractive to investors with re/insurance risk-transfer backing".

Of the economic losses in 2019, USD 137 billion were due to natural disasters, with man-made events causing the remaining USD 9 billion. Of the USD 60 billion in insured losses, natural catastrophes accounted for USD 52 billion. The biggest industry loss events of 2019 happened in densely populated and developed parts of Japan: Typhoon Faxai in September (insured losses of USD 7 billion); followed by Typhoon Hagibis in October (additional insured losses of USD 8 billion).

Economic development and population spread leads to changes in land use resulting in, for instance, deforestation and construction in flood plains and wildland-urban interface. Another variable is the scale of risk mitigation infrastructure like flood barriers and sea defenses. This all influences the scale of losses inflicted by extreme weather events and other natural disasters.

The latest sigma includes a chapter authored by Professor Adam Sobel of Columbia University, which notes that the ways increasing temperatures change natural catastrophe risks are not fully understood due to the short history of observational records and other factors. However, it could take decades to gather the proof points to confirm the impact of climate change. Failure to take immediate tangible action could lead to climate systems reaching irreversible tipping points. This in turn could jeopardize insurability, particularly in areas where urbanization and economic development have led to high levels of concentration of asset (human and physical) value exposure.

"It's difficult to quantify the exact effects rising temperatures have on specific weather-related catastrophes, but climate change is a threat that demands immediate action due to its dire effects on both human life and the global economy," said Jerome Jean HAEGELI, Group Chief Economist at Swiss Re.

Climate change effects are already evident, and include rising sea levels, longer and more frequent heatwaves, and erratic rainfall patterns. Warmer temperatures will likely lead to growing frequency of extreme weather events, the report says. The damaging effects manifest most notably in secondary perils, as evident in each of the last three years. In 2019 specifically, the rainfall-induced floods that came with Typhoon Hagibis, the storm surge driven flooding from Cyclone Idai in Mozambique, and monsoon rains in southeast Asia and from other weather systems wreaked economic and humanitarian havoc. Record-high temperatures in eastern Australia kept wildfires burning across millions of hectares of bushland in the longest-running wildfires the country has ever seen. 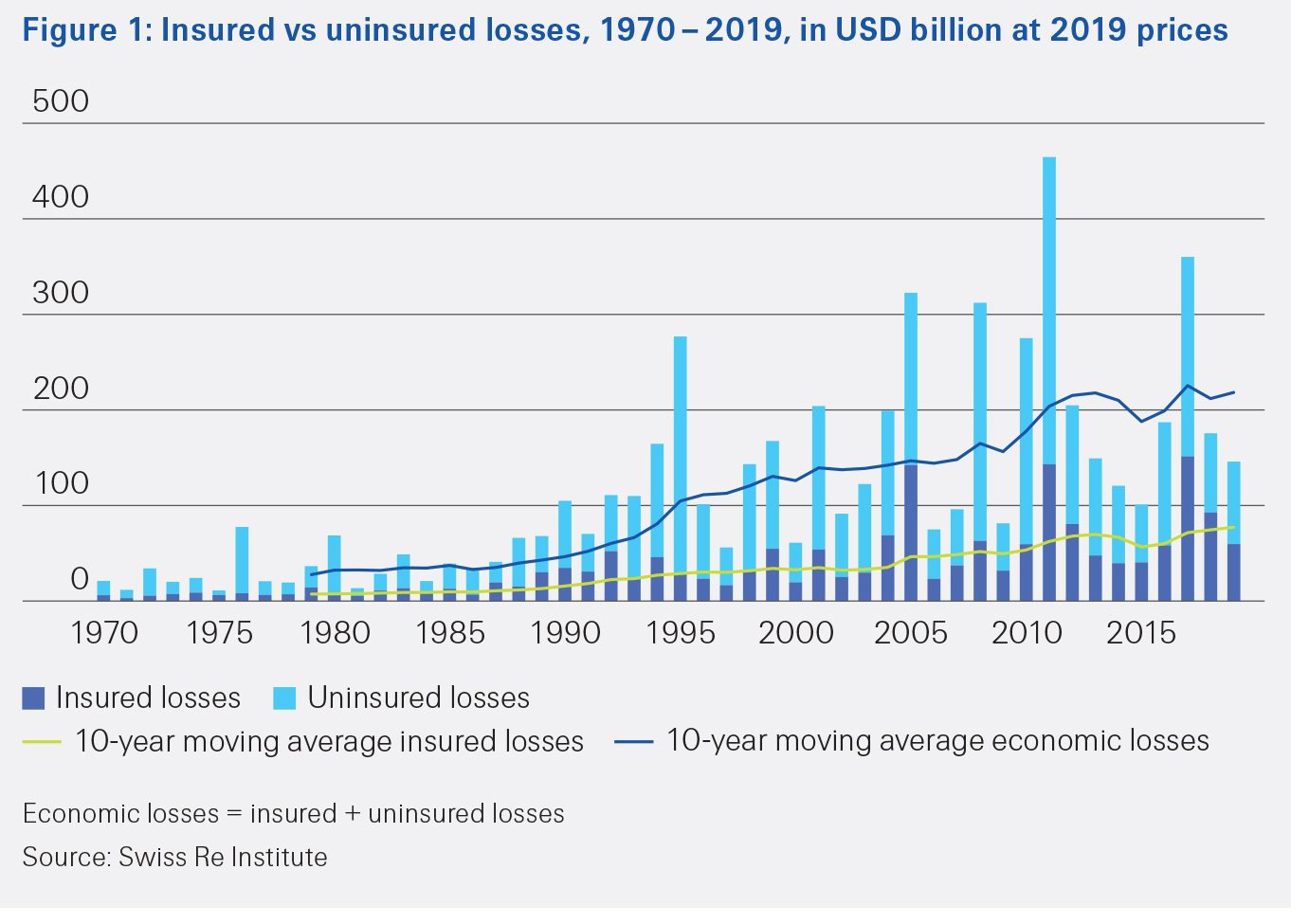 All told, Swiss Re Institute believes that weather risks, with adaptation actions, remain insurable. Insurers need to adapt to a dynamic risk landscape by closely monitoring and incorporating socio-economic developments, the latest scientific research on climate change effects, and the status of local risk mitigation measures in their modelling. Many of today's catastrophe models are benchmarked against historical loss data, which does not reflect the current level of urbanization, and hence do not fully account for today's quickly rising exposures, changing socio-economic environment and climate.

"To uphold the insurance risk transfer model as a powerful tool to foster resilience, insurers need to adapt before, not post events," Martin BERTOGG, Head of Catastrophe Perils at Swiss Re said. "To this end, insurers should be wary of historical loss records in understanding today's state of the socio-economic environment and climate. Averaging out over a past spanning multiple decades can lead to distorted risk assessment."

Typhoon Hagibis is a case in point. Japan has always had high exposure to typhoon risk, and with huge investment in coastal and inland flood defense following the devastating typhoon events in the 1950s and 1960s, the re/insurance industry had considered flood risk in Japan to be largely mitigated. However, most of the USD 8 billion in insured losses from Typhoon Hagibis came from floods, and due to urban development since the mid-20th century, Tokyo was unprepared for the degree of physical damage it suffered.

"While flood defenses prevented major havoc in parts of Greater Tokyo, at least 55 levee breaches and overflowing rivers illustrated that water inundation risk is only partially mitigated," Bertogg said. "The flood defences mitigated the impact, but by no means entirely."