TECHNOLOGY: The Growth of Fintech: From the First Wire Transfer to Blockchain Technology & Beyond

84% of insurers will increase Fintech partnerships over the next 3-5 years, CARASURANCE researchers have found. Get to know the most fascinating numbers and facts about Fintech, one of the most booming industries of our days in the infographic prepared by CARASURANCE.

Whether you've heard about this particular concept or not, you have surely reaped the benefits of the numerous products and services that originated in the Fintech Revolution. From mundane activities, such as paying bills online, to the more avant-garde ones, like developing blockchain-based cryptocurrencies, the idea of fintech encompasses all processes that make handling our finances easier by using digital technologies and computer-powered algorithms. Basically, if you can think of a way to make your financial life less obnoxious, the chances are there's already a fintech company working on the solution.

It all started way back in 1918 when the US Federal Reserve Banks introduced the Fedwire Funds Service, the first electronic fund transfer system, which relied on now-archaic technologies such as the telegraph and Morse code. The next two significant achievements were the creation of the first Diners Club credit card in 1950, by Frank McNamara, and the launch of the first ATM, by Barclays London branch, in 1967.

Perhaps the most crucial stepping stone in the Fintech Revolution was the advent of the internet. It quickly led to a myriad of revolutionary inventions, such as online bank accounts and mobile payments. It even sparked the inception of the first cryptocurrency, Bitcoin, in 2009, which led to 2017's worldwide Cryptomania, during which Coinbase-an online cryptocurrency exchange-exceeded $1.5 billion in value.

Today, most experts understand that financial institutions will have to invest in fintech to avoid becoming obsolete. The consumer banking sector is leading the way when it comes to being the most disrupted industry, at 72%. However, some predictions indicate that in the next 3-5 years 84% of insurance corporations will begin to cooperate with fintech companies, making them the champion of this digital innovation. Some car insurance providers already offer options like paying the entire premium online, and they award forward thinking customers with a discount (check our auto insurance reviews for more details).

Some of the most significant disruptions originated with the introduction of artificial intelligence (AI), blockchain technology, cloud storage, and crowdfunding. Today, around 46% of large fintech companies are powered by AI. Nevertheless, estimates show that, in addition to its use in the back-end processes, AI will also take part in customer interactions, driving 95% of all communication with users by 2025. There are already very powerful robots capable of chatting with humans, such as Sofia. It's estimated that their capacities for human interaction will increase, while their prices will decrease, prompting companies to switch to automated clerks to lower costs and improve customer satisfaction.

Using blockchain technology is another fantastic way for big banks to cut costs. In fact, it's projected that they can save $12.3 billion per year and reduce the infrastructure by 30% if they use this technology. Ripple, a cryptocurrency designed specifically to be compatible with the existing financial structure, is leading the way by operating with 15 out of 50 global banks, including UBS, Bank of China, and Santander. Given the benefits that the technology brings, it comes as no surprise that 77% of fintech firms are expected to adopt the blockchain by 2020.

It isn't always easy to predict what the future will bring, but the outlook of the fintech industry seems very exciting. One area where we can expect improvement is security. We should witness an introduction of advanced authentication methods, such as iris and fingerprint scanners, which will replace the unreliable and cumbersome passwords.

However, the major improvements lie in making financial services more user friendly and less resource hungry, while at the same time tailoring them to the individual. As Joy Schoffler, the Executive Chair of FinTech Professionals, says: "At the core of everything is simplification and personalization." It's possible that voice recognition technology will allow you to order things and pay bills just by saying a few words, while micro-embedded wearables will enable you to shop without ever using a cash register.

Whatever the future brings, one thing is certain: the more you know about the history of fintech development, the easier it will be to navigate the exciting world of life-changing and brilliant technologies that the major fintech companies are working on. Thus, check out the infographic below to learn 87 interesting stats on the growth of fintech. It'll help you stay ahead of the curve when it comes to understanding one of the most important revolutions of the digital age. 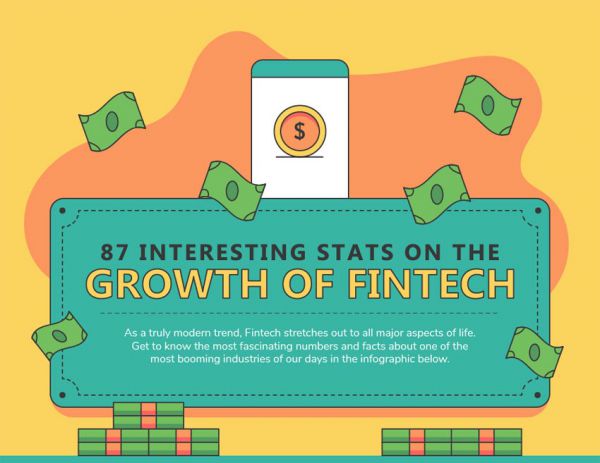 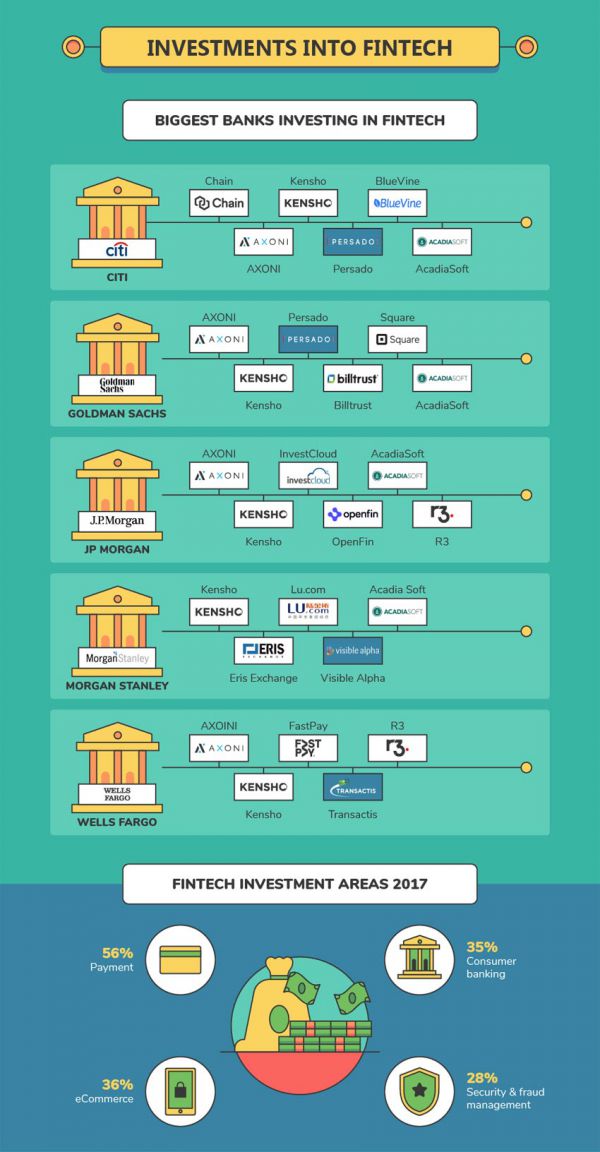 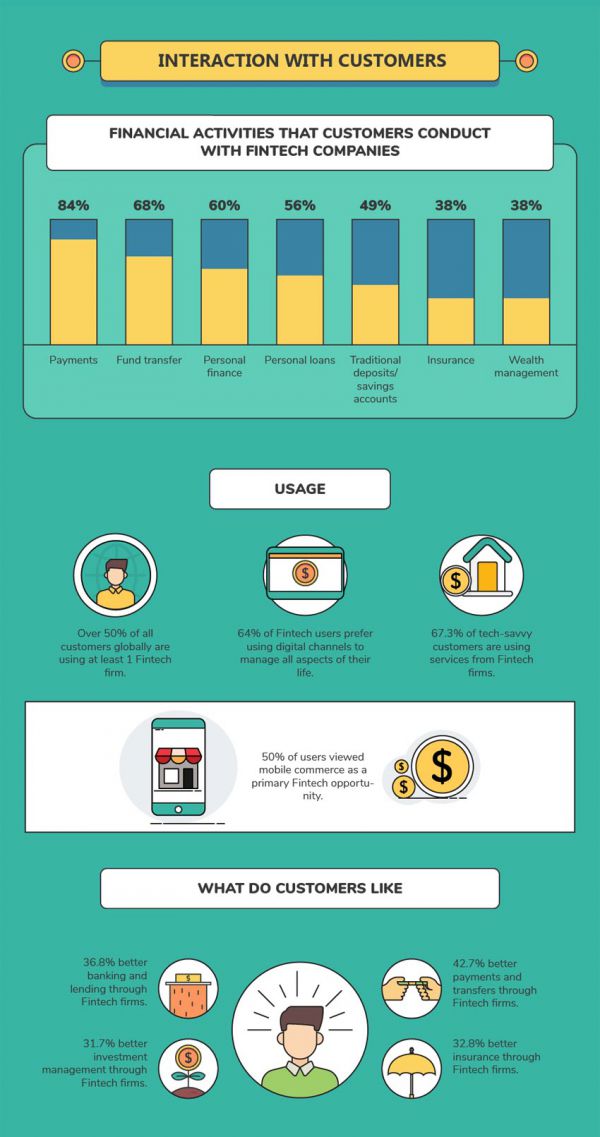 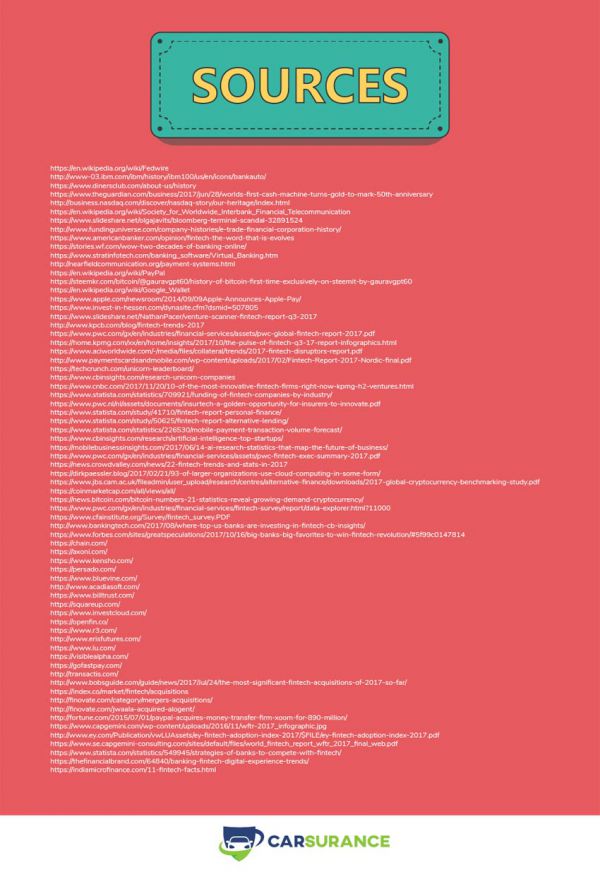 Insurance industry can play a key role in the sustainability transition