TRIGLAV Group, FY2018: 15% increase in the gross profit and growth in all insurance markets and segments

7 March 2019 — Daniela GHETU
According to unaudited data, TRIGLAV Group booked EUR 1,068 million in GWP, 7% more y-o-y, and achieved profit before tax of EUR 97.5 million (15% up y-o-y). Premium growth was recorded in all insurance markets and segments, while the Group strengthened its leading position in the region.

Andrej SLAPAR, President of the Management Board of Zavarovalnica TRIGLAV: "The year 2018 was successful. According to unaudited data, profit before tax amounted to EUR 97.5 million or 15% more than the year before. It was planned between EUR 80 and 90 million, but that was outperformed mainly thanks to the high premium growth, favorable claim ratio and several one-off events, which mostly occurred in Q4 2018."

PERFORMANCE BY INSURANCE MARKET. The improved macroeconomic situation in the region positively impacted the insurance markets within the region and consequently the TRIGLAV Group's operations. In tight competitive conditions, the Group insurance subsidiaries intensified their sales activities and improved services to cater for their clients. All activities were carefully adapted to the level of development and specificities of a particular market.

In 2018, TRIGLAV Group increased the share of premium written in the markets outside of Slovenia by 0.2 percentage point to 17.9%. A total of 76.7% of consolidated gross written premium was charged in the Slovene insurance market, whilst reinsurance premium on the international markets accounted for 5.4%. Premium growth was recorded by all 12 insurance subsidiaries of the Group. In Slovenia, insurance premium was 7% higher on average, of which premium booked by the parent company was 6% higher compared to 2017, whilst that of TRIGLAV, Zdravstvena zavarovalnica and Skupna pokojninska druzba increased by 11% and 9% respectively. The premium on the markets outside of Slovenia recorded an average growth of 8%. The highest premium growth of 12% was seen in Serbia, followed by the 8% growth in Croatia, 5% in Montenegro, 3% in Bosnia and Herzegovina, and 10% in North Macedonia.

CLAIMS EXPERIENCE. Gross claims paid of the Group totaled EUR 679.6 million (index 106). The largest, 58% share of gross claims paid was accounted for by non-life insurance claims, mainly due to the increased business volume over the last few years. A partial impact was a consequence of mass claims from 2017, for which adequate provisions were made and which were appropriately reinsured upon occurrence. They were paid out in 2018. With respect to major CAT events, claims experience was less pronounced in 2018 than the year before, both in terms of frequency and severity. The total value of claims resulting from major CAT events was EUR 18.3 million, whereas in 2017 they amounted to EUR 33.5 million.

GOOD COST CONTROL. Gross operating expenses of the Group totaled EUR 288.8 million (index 105). Intensified marketing and sales efforts combined with strategic development activities resulted in higher operating expenses of the insurance business, however their growth lagged behind premium growth. Compared with the preceding year, the share of expenses in written premium dropped by 0.4 percentage point to 24.5%.

IMPROVED COMBINED RATIO. The combined ratio was planned at around 95%, which is also its average target strategic value. In the reporting period, it stood at 91.8% (vs. 93.1% in 2017) and was in the lower range of its expected value. The combined ratio was improved compared with the year before, primarily as a result of the improved loss ratio and a higher growth in net premium earned than growth in net claims incurred.

LOWER RETURN ON INVESTMENT, AS EXPECTED. According to unaudited data, the rates of return on investment (excluding unit-linked life insurance contract investments) were lower by 29% compared with 2017, mainly as a result of persisting low interest rates on the financial markets. In asset management, the Group closely monitors the situation on the capital markets. By actively adjusting the shares of individual investment grades in its portfolio, the Group appropriately manages market risks and the risks arising from the asset-liability ratio. The structure of the investment portfolio did not significantly change in 2018 and remains consistent with the investment policy of the Group, the focus of which is on ensuring safety and liquidity while achieving adequate returns.

MARKET LEADER IN SLOVENIA AND THE ADRIA REGION. The TRIGLAV Group holds the leading position in the Adria region and in its largest, Slovene insurance market. According to 2017 data, the Group further strengthened its leading market position in the region by 0.2 percentage point to 20.2%, while being the market leader in the Slovene insurance market in 2018 with a 35.4% share (vs. 35.2% in 2017).

In the markets where the Group holds a high market share and the leading position (Slovenia, Montenegro and North Macedonia), the consolidation strategy was pursued, whilst on the remaining markets (Croatia, Serbia, Bosnia and Herzegovina) the focus was on strengthening the Group's position. The Group will continue to operate on the existing markets, while developing new business models and ways of doing business as well as forging suitable partnerships to enter the markets outside the region.

The Group pursues its development and growth strategy in both strategic activities - insurance and asset management. Its growth is organic, however potential takeovers are not ruled out if an opportunity arises. In 2018, the Group signed agreements to acquire the Croatian pension insurance company Raiffeisen mirovinsko osiguravajuce drustvo and the Slovene asset management company ALTA Skladi. Moreover, the Group purchased remaining equity stake thereby becoming 100% owner of the Slovene pension insurance company Skupna pokojninska druzba. 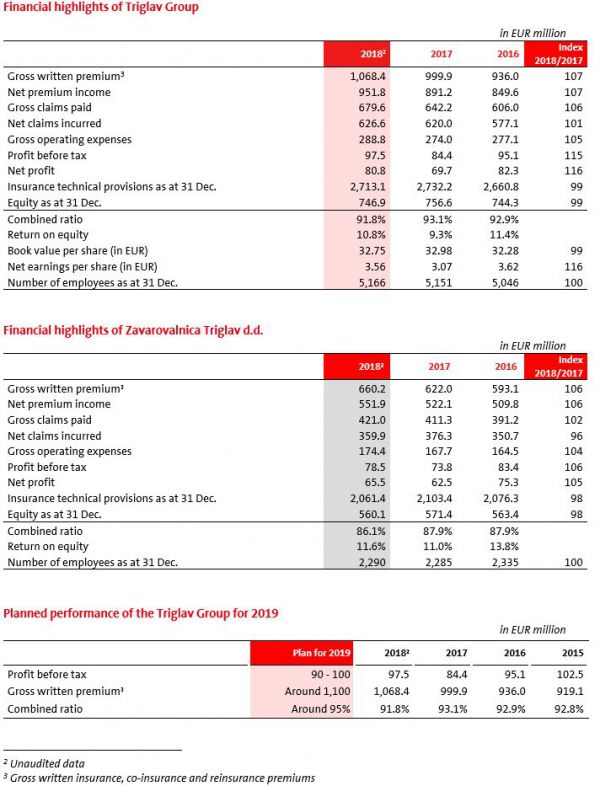 DEVELOPMENTAL STRATEGIC HIGHLIGHTS. TRIGLAV Group Strategy, which was revised in December 2018, preserves its existing main elements and places an even greater emphasis on a client-centric approach, the revised values of the Group (responsiveness, simplicity, reliability) and further reorganization and redefinition of culture of the Group so as to become even more cooperative and agile. Achieving long-term stable profitability and increasing the Group's value remains one of the priorities. Its concrete objectives for the strategy period to 2022 include: "A" credit ratings, the average target combined ratio of around 95%, the return on equity of the Group over 10% throughout the entire strategy period to 2022, an increase of the business volume and the share of premium written in the markets outside of Slovenia, maintaining market leadership, cost-effective operations and comprehensive risk management.

Andrej SLAPAR, President of the Management Board of Zavarovalnica TRIGLAV, said: "We are aware of the challenges of our business environment and we are systematically adapting to them, as is reflected in our revised strategy. In order to be successful, we are creating a stimulating work environment for our employees and care for their development, while establishing a more agile organization and building a cooperation-oriented organizational culture. It is very important to us that we are successful together as a team. The results achieved are the result of teamwork. On behalf of the Management Board, I would like to thank all employees in TRIGLAV Group for their effort."