10 December 2019 — Cosmin CONCEATU
In a recent political risk report for the year 2019, Willis Towers Watson (WTW) and Oxford Analytica found that 61% of 41 global corporations believe political risk levels increased in 2019. Disruption of international trade was considered the most significant risk in the majority of regions.

The industry respondents were chosen from services (46%), manufacturing (27%) and extractive industries (27%). More than two thirds (71%) of these corporations operate with revenues exceeding USD 1 billion annually. More than half (57%) of the respondents were working in senior management, risk management or finance. 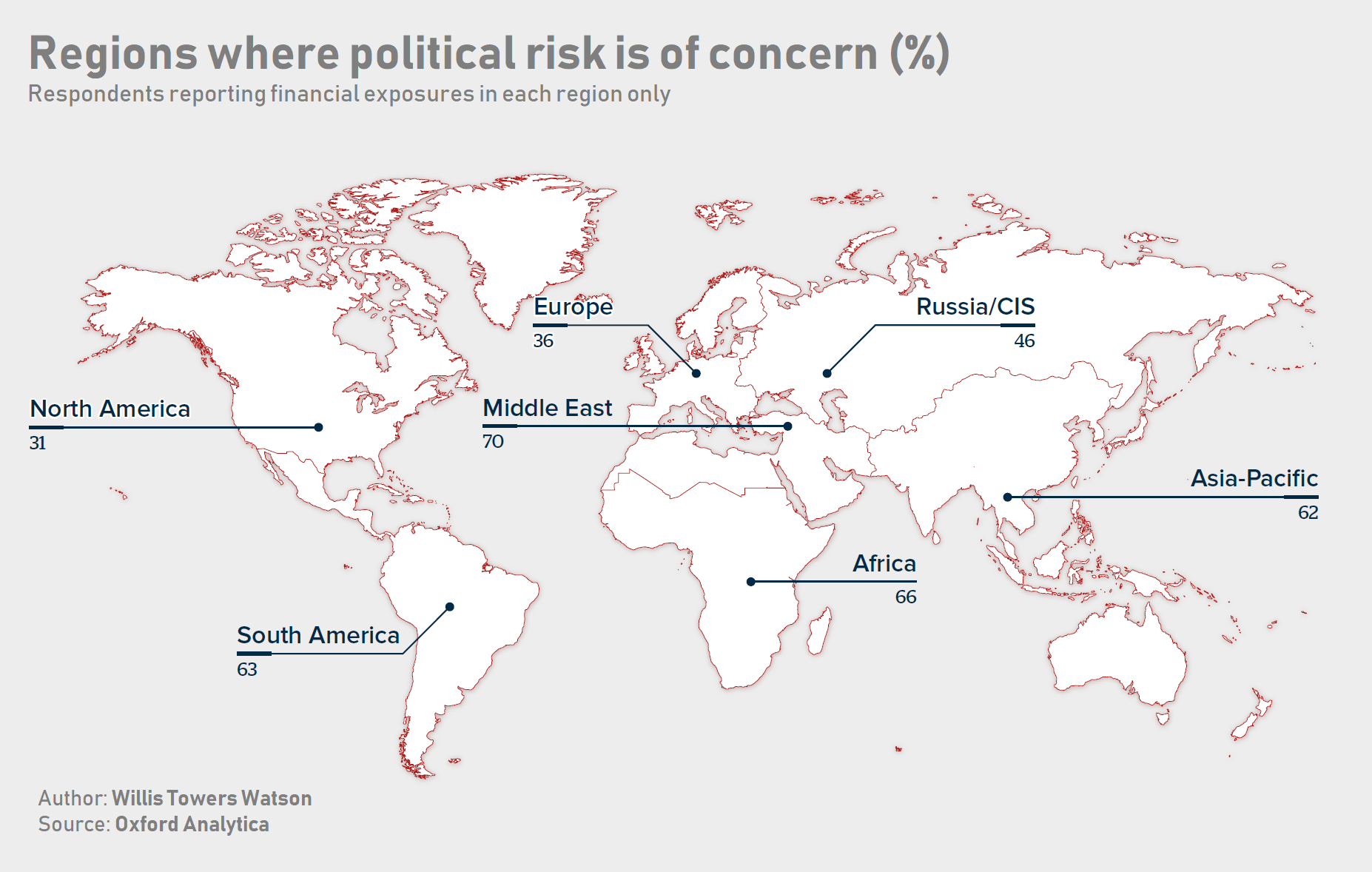 The greatest concerns by types of political risks came from "trade sanctions or import/export embargo" (31%). The other types of political risks considered were "political violence or forced abandonment" (22%), "currency transfer restrictions or inconvertibility" (17%), "expropriation or creeping expropriation" (14%) and "sovereign non-payment" (9%). A trade war involving China, the threat of Brexit and sanctions against Russia, Iran and Venezuela were reported as big concerns by respondents.

Concerns about political violence were the highest in Africa (74%) and the Middle East (71%), with respondents reporting that new technologies such as drone strikes could exacerbate such risks.

2019 also saw an increase in the proportion of companies reporting that they had experienced political risk losses (68%), according to the research. About 54% of respondents had experienced a loss due to political violence, compared to 48% in 2018. About 46% reported losses due to trade sanctions or import/export embargoes in 2019, compared to 40% in 2018. 32% of companies with revenues exceeding USD 1 billion reported previous experience of a catastrophic (more than USD 250 million) political risk loss.

Types of Political Risk losses experienced in 2019 (vs. 2018)
Paul DAVIDSON, chair, Financial Solutions, Willis Towers Watson, noted that the political risk continued to increase in 2019, with the financial losses related to them being on the rise:

"Corporations now face a strategic choice: to either maintain their global business models while accepting, mitigating or transferring the political risks associated with them, or attempt to realign themselves with the emerging shape of a new and apparently more nationalist global landscape."

The overall impression from this year's study was of internationalized companies caught up in nationalist politics. "Conflicts between Israel and Palestine create a complex operating environment because we serve both constituents," noted a manufacturing sector panellist. Other challenges are newer, and more fundamental to global supply chains: "Both China and the US are major clients/consumers for us," an oil and gas panellist lamented. In a similar vein, a mining sector panellist said: "The biggest problem is US-China trade war. Supply chains oriented towards China will suffer. 'Made in China' could cause you problems."

Insurance industry can play a key role in the sustainability transition