WTW: 2019 InsurTech investments break all-time record with USD 6.37 billion at the end of the year

30 January 2020 — press.release
Total investments directed to InsurTech platforms reached USD 6.37 billion in 2019, according to the new Quarterly InsurTech Briefing from Willis Towers Watson. This value represents 33.9% of the historical total, following a record-breaking USD 1.99 billion of investment in 75 projects during the last quarter of 2019 alone.

During 2019, 8 "unicorn making" rounds of investment took place, creating 5 new unicorns (privately held start-ups valued at over USD 1 billion), of only 10 InsurTechs globally that have reached this threshold. 2019 also saw a 90% jump in investment rounds that exceeded USD 40 million.

In Q4 2019, InsurTechs raised USD 244 million in early stage funding. P&C start-ups continued to take a greater share of total InsurTech investment than their life and health counterparts, continuing a trend seen since Q3 2016. Early stage funding to P&C companies grew to 69%, up slightly compared with 2019 Q3. Distribution- and MGA-focussed InsurTechs accounted for 57% of all deals by number. 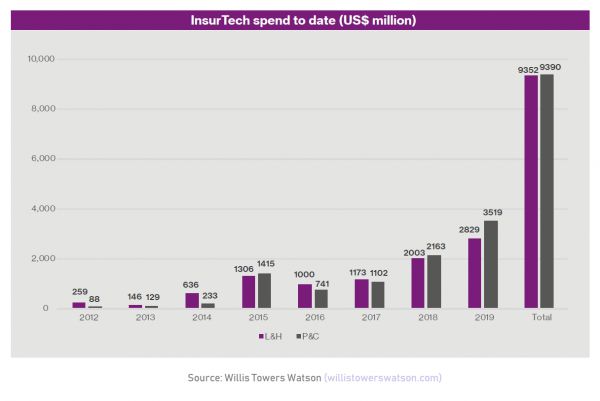 Andrew Johnston, global head of InsurTech at Willis Re, said:

"2019 was the year when individual InsurTechs began to come to the fore to lead in specific parts of the market, whether in certain lines of business or in the use of particular technologies. For example, UK-based Concirrus is now clearly the forerunner in behavioural-based analytics for the specialty markets. But while InsurTech news is awash with the huge valuations and postulations of the art of the possible, there is also a very real story that is not so positive - individual InsurTech cessations. The number is very difficult to calculate, but our data indicates that during the past three years, approximately 184 funded InsurTechs might have closed their doors."

The latest briefing concludes a year-long review of the 'functional chain,' with claims and settlement as the topic in focus. It includes detailed discussions of 10 InsurTechs: Metromile, Benekiva, ClaimVantage, Claimspace, Claim Central, DeepFraud, Global Parametrics, Adjoint, Banqu, and Spixii.

"Although the very simplest common claims, such as automobile windscreen, may already be handled entirely by automated systems at some insurers; end-to-end automation can never work in all scenarios, even in consumer lines. Some aspects of the claims process require complex human judgement or investigation, and other cases, such as the need to empathise with a customer who needs support, demand the human touch. This means that claims handlers will remain in the driving seat. It is essential that automated mechanisms are able to identify when a situation needs human intervention, making effective management of the interaction between handler and machine a critical consideration."