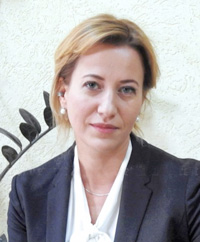 Ecaterina Caraman, head of the Corporate Investment Department within Moldova Agroindbank (MAIB) could be appointed to lead the National Financial Market Commission (NCFM), the autonomous public authority that authorizes, regulates and supervises the activity of participants in the non-banking financial market in the Republic of Moldova.

The Parliamentary Commission for Economy, Budget and Finance today approved the candidacy of Ecaterina Caraman for the position of Chairman of the Board of Directors of the National Commission of the Financial Market (CNPF). Her appointment has to further be voted on by Parliament.

According to the journal MOLD Street, Dumitru Alaiba, chairman of the Parliamentary Committee on Economy, Budget and Finance, stated that Ecaterina Caraman "has decided to continue her career in the public sector," this being "a very successful acquisition for the state."

According to her CV, Ecaterina Caraman manages the activity of the Corporate Investments Department within MAIB since 2014, being directly responsible for the implementation of the bank's investment policy and for the organization of MAIB's activity on the Stock Exchange.

According to the source quoted by MOLD Street, Ecaterina Caraman's current project is the listing of MAIB on the international market, which is a premiere for the Moldovan financial market.

MOLDOVA: in the spring of 2022, the number and size of agroinsurance contracts dropped sharply

KOSOVO: in the first five months, the market expanded by 15% y-o-y

MONTENEGRO: Memorandum signed between the insurance supervision agencies of Montenegro and Austria