GDV: Insured flood damage in Germany in the range of EUR 4 - 5 billion; compulsory insurance could not shoulder the costs of climate change

22 July 2021 — Daniela GHETU
The flood disaster last week in Germany caused losses in the range of EUR 4-5 billion according to preliminary estimates of GDV. While insurers are still assessing claims, it is clear that Bernd is one of the most devastating storms in the recent past.

"We are currently counting on insured losses of EUR 4 to 5 billion," said the general manager of the German Insurance Association (GDV), Joerg Asmussen. "The damage is likely to be even higher than that of the August flood in 2002 of EUR 4.65 billion. 'Bernd' is one of the most devastating storms in the recent past," said Asmussen.

According to Munich Re experts, the low-pressure system Bernd - possibly related to the above-average warming in the Arctic owing to climate change -, was a stationary weather pattern. It essentially hovered above Central Europe for several days, causing strong storms and heavy precipitation in Switzerland, western Germany, Belgium, Luxembourg and the Netherlands from 12 July 2021. Western Germany was particularly hard hit, where the rainfall was so heavy in many places that it statistically occurs, according to historical meteorological data, less than once every 100 years.

Rapidly rising water, flash floods and mudflows then led to disastrous losses. Many buildings collapsed; vehicles and bridges were swept away. The water rose so quickly that many people died in western Germany. Soon thereafter, severe flash floods occurred in Austria and southeastern Germany. An accurate estimate of losses in the region is not yet possible 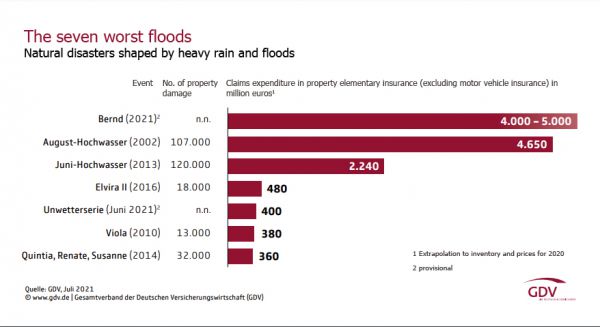 "Overall, this year with storms, floods, heavy rain and hail should be the most damaging year since 2002," said Asmussen. At that time, the insured storm damage was EUR 10.9 billion. Heavy rain and hail had already caused an estimated insured loss of EUR 1.7 billion in June.

While it is difficult to attribute Bernd or other specific extreme weather events to climate change, the increased intensity and frequency of such events, in general, is obvious and scientifically attributable to it. "Many scientists believe that climate change is influencing weather hazards such as heatwaves, droughts, extreme precipitation, and storms in certain regions. However, it is not possible to definitively trace a specific weather event to climate change. All the same, modern research methods known as attribution studies enable scientists to determine whether a recent extreme weather event (e.g. heavy precipitation) in a specific region was made more probable by climate change," says Munich Re.

To better protect citizens against the financial consequences of such catastrophic events, compulsory insurance solutions may seem appropriate. Yet, as GDV representatives have stressed out, "compulsory insurance could not shoulder the costs of the lack of climate change adaptation. At best, it would make sense if it were integrated into a new overall concept for area and building planning as well as disaster control." Otherwise, it would only take away the incentive for homeowners to protect themselves against flood and other extreme weather risks.

Insurance Europe: the European insurance industry can play a key role in the transition to sustainability

Insurance Europe: it is important to prioritize the completion of the environmental taxonomy