The Big Four European reinsurers (Hannover Re, Munich Re, SCOR and Swiss Re), accounting together for about one third of global P&C reinsurance premiums, have each took advantage of firmer pricing to grow selectively in the 1 January 2021 P&C reinsurance renewals, Litmus Analysis' annual survey has found.

The British team of analysts said terms and conditions offered by all four reinsurers have tightened, and each expected the trends to be maintained at later renewals through the year. However, some divergent trends were observed within the group: while Hannover Re, Munich Re, and SCOR all booked an overall increase in renewed premium volume at the renewal (by 16%, 11% and 9%), Swiss Re took action to limit exposure in certain classes of business resulting in an overall decline in its renewed book by about 11%.

Each of the companies in Litmus's study reported an overall rise in risk-adjusted pricing, ranging from 2.4% for Munich Re to 7.8% for SCOR, with price increases across almost all lines and territories, especially on loss-affected business. 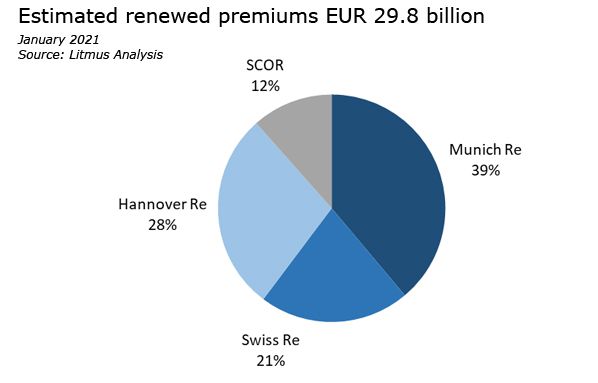 Litmus calculates the four companies reported an increase of 5% in aggregate, which is significant especially considering that their January renewals encompass close to half of their traditional treaty reinsurance premiums.

The combined renewal experience reported by the "Big Four" shows that EUR 28.4 billion of treaty reinsurance premiums were up for renewal in January. Of this 9% was cancelled or replaced, while the remaining 91%, worth a total of EUR 25.7 billion was renewed. Price changes and increases in shares on treaties resulted in an 4% increase, while new business added another 10%, benefiting from growth across virtually all core business lines. The combined portfolios grew 5%, which was the same as that reported at 1 January 2020.

According to Litmus analyst, the top four reinsurers are acting as trendsetters in the industry, their experience acting as a useful indicator for the market as a whole. In addition to commenting on their individual experience, Litmus uses their disclosures to present a composite picture.

The full summary of the report is available here.

For a copy of the complete report or for further information about Litmus Analysis and the services it provides please contact analytics@litmusanalysis.com