10 November 2022 — Daniela GHETU
Munich Re achieved a profit of EUR 1,903 million in the first three quarters of 2022, by 7.6% lower y-o-y, high major-loss expenditure in property-casualty reinsurance and strong performance in life and health business being the major impact factors, as well as a robust increase in reinvestment yield.

"Financial solidity and professional expertise are of fundamental importance to our clients in times of crisis and guide Munich Re in its actions. Hurricane Ian matches the pattern science would expect of a warming world. Therefore, the rising probability of such extreme storms is part and parcel of our models and must be reflected in pricing. The sustainable and reliable offering our clients expect of us is based on realistic analyses, not only of natural catastrophe risks, but also of cyber and pandemic risks. And although Hurricane Ian and the macroeconomic environment are making it significantly more challenging for us, we are firmly adhering to our annual guidance of EUR 3.3 billion. All fields of business are contributing to sustainably positive performance," Christoph Jurecka, German Group's CFO commented. 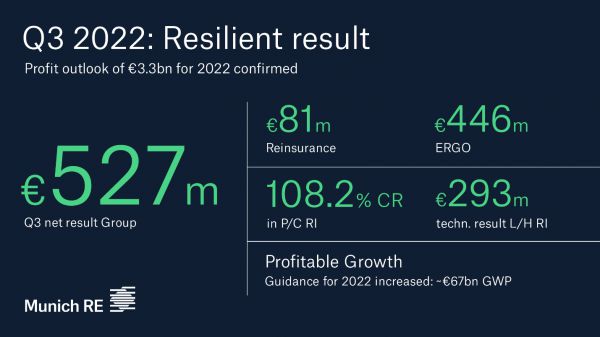 Munich Re achieved a profit of EUR 527 million in Q3 2022, and a total of EUR 1,903 million in Q1-3. The quarter was marked by above-average expenditure for natural catastrophes. Munich Re projects losses of around EUR 1.6 billion from Hurricane Ian. The operating result fell to -EUR 346 million, compared with EUR 204 million for the same quarter last year. The other non-operating result amounted to -EUR 5 million (-18 million). The currency result increased significantly y-o-y to EUR 846 million, in particular owing to exchange gains on account of the US dollar. The effective tax rate was -16.8%. GWP were significantly up y-o-y by 17.8% to EUR 18,228 million in Q3 and rose by 14.0% to EUR 50,910 million in Q1-3.

The reinsurance field of business contributed EUR 81 million, down from 232 million the previous year, to the consolidated result for Q3 of EUR 1,201 million (1,594 million) for Q1-3. The decline compared with the same quarter last year is mainly attributable to the expenditure for Hurricane Ian and the lower investment result. The operating result totaled -EUR 687 million (13 million) in Q3. GWP were up significantly to EUR 13,712 million (11,160 million).

Major losses of over EUR 10 million each were up in Q3 and totaled EUR 2,316 million (1,974 million). As usual, these figures include gains and losses from the settlement of major losses from previous years. Major-loss expenditure corresponded to 26.9% (29.6%) of net earned premiums and was thus higher than the long-term average expected value of 13% both for Q3 and for Q1-3 (15.1%). Man-made major losses rose to EUR 489 million (245 million). After Hurricane Ida and Storm Bernd had caused high losses in the same quarter last year, major-loss expenditure from natural catastrophes again saw a slight increase to EUR 1,827 million (1,729 million) in Q3 2022. The costliest natural catastrophe for Munich Re in Q3 was Hurricane Ian, with projected losses of around EUR 1.6 billion.

In Q3, reserves of EUR 344 million (265 million) were released for basic losses from prior years; this figure corresponded to 4.0% (4.0%) of net earned premiums. Munich Re continually seeks to set the amount of provisions for newly emerging claims at the very top end of the estimation range so that profits from the release of a portion of these reserves can be generated at a later stage.

In life and health reinsurance, Munich Re now expects a significantly higher technical result, including the result from insurance contracts with non-significant risk transfer, of EUR 800m (previously: EUR 400m) for the whole year, owing to gratifying business performance in Q3 in particular.

For property-casualty reinsurance, Munich Re projects a combined ratio of around 97% (previously: 94%) of net earned premium on account of the high natural catastrophe losses that occurred in Q3.

In the ERGO International segment, Munich Re envisages a combined ratio of around 94% (previously: 92%) of net earned premiums. This adjustment is significantly driven by developments in Poland and Spain.

The other targets communicated for 2022 remain unchanged.

All forecasts and targets face considerable uncertainty owing to fragile macroeconomic developments, volatile capital markets and the unclear future of the pandemic. In particular, there continues to be considerable uncertainty regarding the financial impact of the Russian war of aggression in Ukraine. As always, the projections are subject to major losses being within normal bounds, and to the income statement not being impacted by severe fluctuations in the currency or capital markets, significant changes in the tax environment, or other one-off effects.

Read the full release on Munich Re's Q3 results on the Group's website.

Elisabeth STADLER, General Manager (CEO), Chairwoman of the Managing Board