Number of road fatalities in EU is decreasing

In 2018, more than 25,000 people lost their lives on EU roads, European Commission data shows. Last year the number of fatalities at EU level decreased by 21% compared to 2010. On April 2019, EU has initiated new programs to be introduced, to further reduce the number of accidents and improve road safety.
The average fatality rate in 2018 was 49 road deaths per 1 million inhabitants. This represents a decrease of 1% compared to 2017. Only 2 EU member states registered a higher than 80 deaths per million inhabitants: Romania and Bulgaria. This reflects an improvement though; in 2010 there were 7 countries exceeding this level. 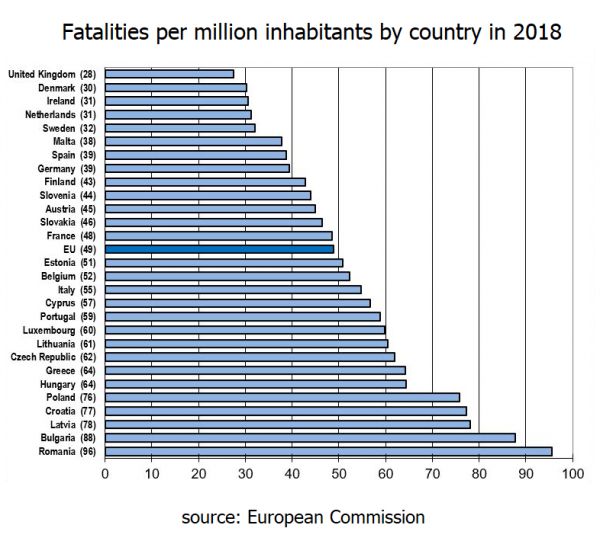 The figures based on preliminary data show that the countries with the safest roads in EU were UK, Denmark, Ireland and Sweden, with less than 32 deaths per million inhabitants. At the other end of the spectrum, the most dangerous roads, with fatality rates of over 76 deaths per million inhabitants, stood 5 CEE countries: Poland, Croatia, Latvia, Bulgaria and Romania.


The European Commission offered a description for each EU country in the study, regarding road traffic fatalities. In 2018, EU members from CEE & SEE regions were described in the report as it follows:

EU roads are among the safest in the world. Average road mortality in the EU is 49 fatalities per million inhabitants, while the global average sits around 174 deaths per million. However, while the number of accidents has almost halved in the past 2 decades, in recent years evolution of road fatalities rate seemed to be stagnating. 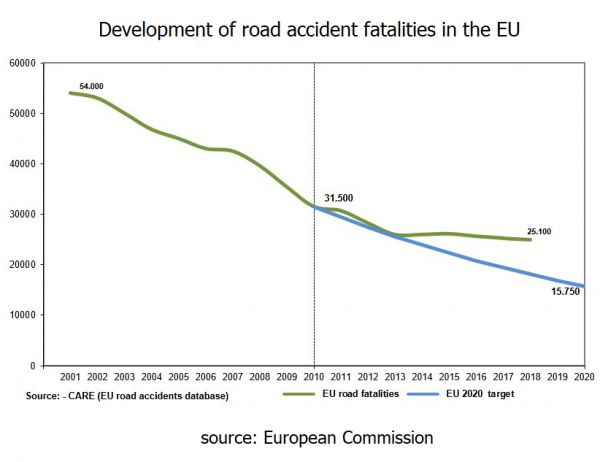 Members of the European Parliament (MEPs) took initiative on 16 April and adopted a set of rules meant to make road traffic safer for everyone inside the EU. The new rules will start to apply to all vehicles sold on the EU markets, from May 2022 for new vehicles and May 2024 for existing models.

Some of the technologies proposed by MEPs to be included in all new vehicles are:
The new compulsory safety measures could drastically reduce the number of road accidents and fatalities, considering that human error is the cause of accidents in most cases.

"This law paves the way to saving thousands of lives in the coming years. Our focus was always on the safety of road users, especially vulnerable ones. The additional obligatory equipment for cars, trucks and buses will help to save lives," said Roza THUN (EPP, PL), who steered this legislation through parliament.


More details about the subject can be found here:

ALLIANZ TRADE: Eurozone inflation: How bad can it get?

Finaccord: the shift to digital is likely to last in the insurance distribution

Bosnia and Herzegovina: charter capital of insurance companies has increased