13 January 2020 — Cosmin CONCEATU
At the end of the first nine months of 2019, Romanian motor insurance lines' combined ratio continued to follow the uphill road, both Motor Hull and MTPL exceeding once again the 100% threshold of profitability at market level. 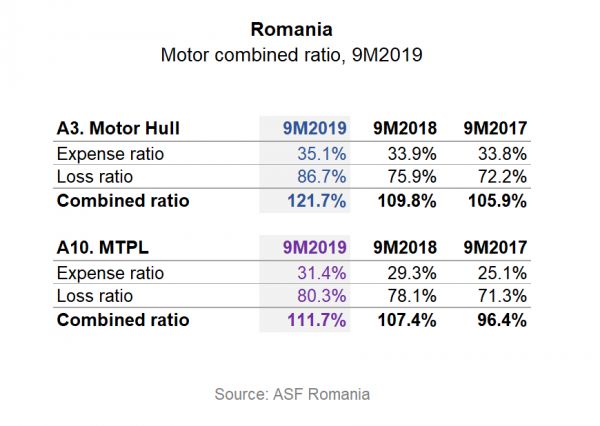 According to the Financial Supervisory Authority (ASF), out of the total of 14 Motor Hull insurers, only one insurance company kept a combined ratio under 100%. Half of these insurers (7 companies) recorded a Motor Hull combined ratio exceeding 139%.

According to ASF, out of 10 MTPL insurance companies, only 2 of them managed to maintain an MTPL combined ratio under 100%.

MTPL paid claims volume increased both in material damage (+18.9%) and bodily injuries (+5.6%). Material damage compensations increased at a faster pace than body injuries in the past years. Romanian MTPL insurers continue to argue that repair shops charge unreasonably high prices for car parts, thus forcing them to increase the MTPL premiums to the expense of losing their clients.

One such conflict began between COTAR and EUROINS. "This association represents repair shops which managed the astounding performance of invoicing a Dacia Logan light body with almost EUR 400 euro - when such a part is available at prices between RON 300-700 (~EUR 63-147), depending upon the model's generation. (...) If these repair shops did not force Euroins and the other MTPL insurers to pay extravagant prices, the average rates for the MTPL policies would probably further decrease," EUROINS Romania stated.

Also, the fierce competition in the MTPL market between two players, EUROINS (9M2019: 31.7% MTPL market share) and CITY (9M2019: 39.0% MTPL market share), cause the insurance premiums to stay at relatively low levels. The two aforementioned companies have the advantage of operating at constant high business volume, which helps them keep the MTPL line at a decent level of profit. 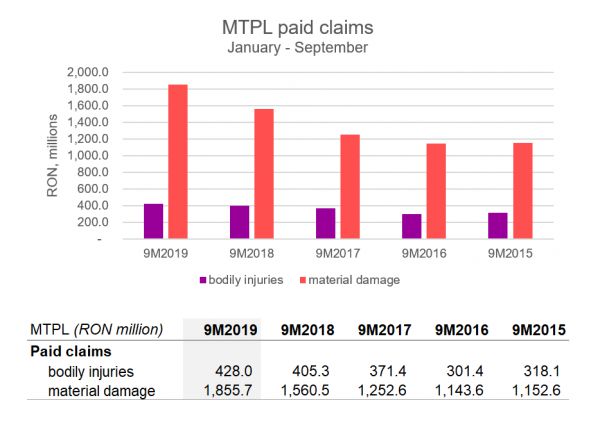 Alexandru Ciuncan is the new PDG of the Romanian Insurers Association