RUSSIA: Reinsurance in 2020, despite the pandemic, increased in both the inward and outward segments

19 April 2021 — Marina MAGNAVAL
In 2020, the inward reinsurance market increased by 14.4%. According to the RNRC (Russian National Reinsurance Company), after a sharp increase in 1Q2020, the market continued the trend of a gradual decline in growth rates throughout the year until 4Q2020.

For the first time in a year, the premium volume for the quarter was 4% lower than a year earlier. As a result, the annual premium growth dropped below 20%.

The growth rate of the market without RNRC outstripped the growth rate of RNRC. Excluding RNRC, the market growth for 2020 amounted to 16.5%, mainly due to foreign business, where the share of RNRC is decreasing. The international market share reached 41.9%.

An earlier forecast about a possible reduction in the gap between the leading countries, from where premiums come to Russia, was never realized in 2020. Premiums from France increased by 25%, while the Chinese share showed an increase of only 7%. As a result, the leaders changed places. The UK returned to the TOP-10, after leaving it in 2019 due to the transfer of Chubb's business to France. At the end of the year, Turkey and Barbados appeared in the TOP-20.

The market concentration at the end of 2020 remained at the level of 2019 (TOP-10 account for 87%). The share of the TOP-3 (58%) gradually declined throughout the year as the activity of other players grew.

The dynamics of inward reinsurance paid claims after an unsuccessful 2019 year for the domestic market, in 2020 developed better than usual, Natalia KARPOVA, President-Chairman of the Board of RNRC said at the 25th Reinsurance Conference.

After an unsuccessful 2019, the Russian market segment set a record. It is possible to talk about successful 2020 for reinsurance, without any major losses. Unlike 2019, in 2020 there were no companies with negative results among the leaders. All companies from the TOP-10 have crossed the billion (in RUB) mark.

Outward reinsurance premiums for the year increased by 17%

At the end of 2020, the outward reinsurance premium volume grew by 17% due to a sharp rise in the first and third quarters. A noticeable part of the growth is associated with reinsurance of a large (~ RUB 10 billion) multi-year project of SOGAZ, and also partly with the accelerated fall in the ruble exchange rate in the second half of 2020. After the extreme growth in 1Q2020, the domestic market was lagging behind the international one (12% vs 19% respectively), which led to a drop in the domestic market share for the first time in several years, RNRC noted. 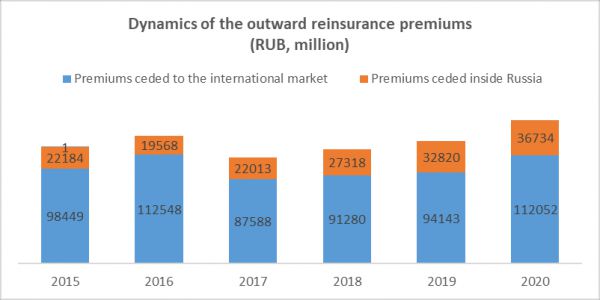 At the end of the year, the situation with premiums distribution between countries returned to a more normal one. The leaders among the countries where premiums are ceded are Great Britain, Germany, Switzerland, France, and the USA. RNRC emphasized that the SOGAZ's project had its impact - the share of Great Britain, where LLOYD`s syndicates are located, improved. The share of Germany noticeably decreased which is largely due to a sharp decline in Motor Hull reinsurance by SOGLASIE. Italy returned to TOP-20; Hong Kong and Singapore showed tenfold growth.

SOGAZ, a long-term leader in the outward reinsurance market, demonstrated a significant increase in the ceded portfolio in 2020. However, INGOSSTRAKH showed an even more impressive premium growth rate - by 40% y-o-y (second place). In general, besides the TOP-2, the market dynamics were less active - from the TOP-10, only ROSGOSSTRAKH grew faster than the leaders (by 71%), VSK also had a noticeable increase (+35%). A two-fold growth was recorded by SBERBANK INSURANCE and HAYDE, which entered the TOP-20. Reinsurance volumes of SOGLASIE decreased the most.

Speaking about the dynamics of paid claims in outward reinsurance, RNRC stressed that in the absence of large losses, 2020 turned out to be surprisingly favorable year for reinsurers - record low payout ratio which had not been observed for a long time.

This turned out to be especially favorable for the Russian reinsurers, strongly affected by the 2019 paid claims.

RUSSIA: the number of complaints against insurers in January-March 2021 increased by 4% y-o-y

RUSSIA: NAAI: in the first quarter of 2021 GWP in agroinsurance with state support increased by 16% y-o-y

RUSSIA: Obligatory program of SBERBANK insurance has become the largest on the market

RUSSIA: NAAI: from 2018 to 2020 subsidized agroinsurance more than tripled