4 July 2019 —
How had the reinsurance industry fared on the Kazakhstan market for the last five years (2014-2018) ? In this article main trends and mainstreams are analyzed and the simplest recommendations that may give an impetus to a new development stage are provided. The most obvious trend is the decline of outward reinsurance for the last five years, but still the amount of reinsurance GWP is quite significant, which indicates a lack of local market capacity and dependence on the foreign reinsurance. However, if using simple statistic base and applying mathematical operations, it turns out that the total reinsurance volume in the local market does not exceed 0.13% of the global reinsurance market, which has been stable for many years, on average of USD 200 billion per year. What is surprising, taking into account our ambitions in part of the risk pricing offered for reinsurance, as well as absolute disregard for the laws in the international market. Any examples? Underwriting cycles - «no, never heard of that» - it's about us. And it is surprising, because considering regular prices and approach, we can confidently declare that our market experts can «do magic» in the market. The risk transfer structure is as follows: 84% is ceded in reinsurance to non-residents reinsurers and 16% to residents respectively. The volume of the domestic reinsurance is not quite large, but still indicates local market's dependence on the «cheap» reinsurance from local insurers due to the fact that finding the most reliable international reinsurance capacity sometimes is not possible at the prices offered by the local market. However, the loss ratios states by itself, 71% for inward reinsurance vs 18% overall loss ratio for the entire market (i.e. almost four times higher).

Moreover, the net loss ratio (29%), which is calculated after the reinsurance paid claims, is also 1.5 times higher than the general (total) excluding reinsurance which indicates about the inefficiency of most reinsurance programs. One of the reinsurance roles is to mitigate the effect of a large paid claims. Unfortunately, the table presented below shows the opposite situation. Territorial split of reinsurers practically reflects the picture of the reinsurance world available to a Kazakhstan's insurance companies. Definitely, London market leads with its 27%, which is understandable and logical, but a small shares of countries such as Germany, Switzerland, France eloquently shows that everything is not so smooth in our «kingdom». Why? The largest and the most reliable continental European reinsurers transfer risks to market players from these countries. The global market leaders such as Munich Re, Swiss Re and others are not very comfortable to accept risks from Kazakhstan due to, figuratively speaking, weak underwriting information, as well as low «quality» of risks. Separately, a few words on treaty programs, in the absence of the adequate and available statistics, it is very difficult to accurately describe the problem, however, according to the information gathered, only half of insurers in Kazakhstan regularly buy treaty programs, most of which covers the property risks only. According to a rough expert assessment, treaties cover no more than 15% of the total GWP ceded to reinsurance. Seemingly, there is an acute shortage of the professional personnel in the reinsurance market, there is an urgent necessity to reduce administrative costs, as the main component in the combined ratio is precisely the expense ratio, not losses. At the same time, the easy way, that treaty programs offer does not seem to be a priority. It all sounds at least strange.

Even sadder is the situation with the catastrophic coverage, only one out of four companies (less than 25%) acquires the annual coverage against natural disasters. It can be assumed that many insurers do not need such programs at all, but as practice shows, at least, major players have risk aggregation (over 50%) associated with Almaty, and Almaty is always at risk, it is a very well-known fact.

According to all theories, the catastrophic coverage protects self-retention portfolio and therefore the capital of the company's shareholders, while it is even more strange to hear that companies' shareholders consider the purchase of such coverage as a waste of money.

According to the same risk management theory in insurance companies, the reinsurance programs should be developed and approved not even at the management level, but at the Board of Directors level, as the quality of reinsurance has a strong impact on super-strategic goals such as profitability, liquidity and capital preservance.

So, the main negative trends on Kazakhstan reinsurance market are:

A few words about the main trends in reinsurance regulation: according to the CONCEPT of Kazakhstan Republic financial sector development until 2030, the main objectives of the regulator in the field of reinsurance are announced in the Resolution of the Government of the Republic of Kazakhstan dated by August 29, 2014 No. 954:

The key rules affecting reinsurance, entered into legislation in 2018:

• according to the National Bank' s Resolution No. 12 which regulates the method of calculating the insurance reserves, reinsurer's share in unearned premium reserve under a proportional reinsurance contract is 0 (zero) provided that:

- the conditions that upon the early termination the part of the premium is not refundable;

- under contracts of non-proportional reinsurance;

- under contracts of compulsory auto insurance;

- under contracts of voluntary insurance by classes: civil liability, loan insurance, losses of financial organizations and other financial losses, except of its transferring to the insurance (reinsurance) pool.

• introduction of reasonable economic feasibility and price quotes analysis to justify the reinsurance outside the Republic of Kazakhstan;

• increase of the maximum amount of retention by an insurance company to KZT 25 billion (circa USD 65.5 million);

Introduction of reasonable economic expediency is logic but requires not a narrow-minded approach, as it increases the administrative costs, but the integrated one, which implies the existence of a strategic reinsurance goal for a particular insurance company, providing all possible and associated risks and different scenarios.

The factors, which in our opinion should be regulated, however which are not supported by the National Bank, but which can have a positive impact on situation:

In conclusion, if shortly, there are some suggestions for insurers that are so-called an «easy recipe» of a proper nutrition to increase the reinsurance efficiency:

In general, without pretending to be the ultimate truth, according to the global standards our development stage is only at the beginning, a lot has been done in 25 years, but there is still more to be done. We just have to start doing something... 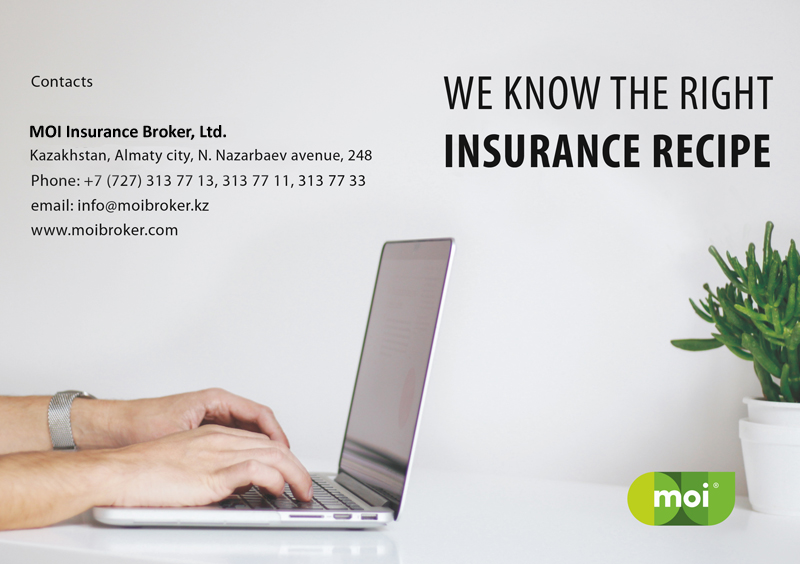 MOLDOVA: ASTERRA GRUP's evolution remains stable and sound, despite the momentary lack of compliance with the latest regulations on assets investment structure

BELARUS: from January to November 2020, the insurance market expanded by 8.8% y-o-y