STORY LAB with Karel van HULLE: the Solvency II Review will be a success when it goes beyond the correction of technical imperfections

15 April 2021 — Daniela GHETU
"I have learnt to appreciate insurance. It is very different from banking. It attracts a different kind of people," Prof. Karel van HULLE has confessed at the STORY LAB show's microphone in the first episode of the new series of interview launched by XPRIMM yesterday.

"Because of the technical nature of insurance, insurers have great difficulties explaining what they are doing. This is one of the reasons why the important socio-economic role of insurance still remains one of the world's best kept secrets," he added. After a long career that has crossed through several fields and institutions of the European financial world, one of the achievements that made him most known was his role in designing and implementing the Solvency II supervisory regime of the EU. It was a long and difficult process, but today Solvency II principles are already adopted far beyond the EU borders. Currently, the regime is undergoing a revising stage which raises again a lively debate.

Here is the opinion the "father of Solvency II regime" -as Karel is often called -, shared with the STORY LAB viewers on the regime's review:

When talking about the Solvency II Review, it is important to always keep in mind that Solvency II has worked well, even in times of serious stress, as has been shown by this pandemic.

There is no need for a fundamental review of the solvency regime. This is recognised by EIOPA, as well as by the insurance industry. 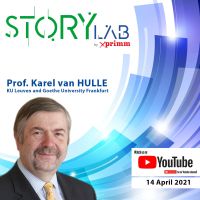 On the basis of a call for advice from the EC, EIOPA has made a number of proposals for reform in its opinion published in December 2020. Some of these proposals have been welcomed by the insurance industry, while others have been severely criticised, for instance the proposals relating to the risk margin, the volatility adjustment and the extrapolation.

Industry also wants a number of calibrations to be further reduced, particularly the capital charges for long term investments.

Another controversial issue are the proposals concerning macro-prudential supervision. EIOPA would like the solvency regime to be furthered completed by the addition of new supervisory tools in order to tackle systemic risk. EIOPA also wants to introduce a regime for recovery and resolution and for insurance guarantee schemes.

The ball is now in the camp of the EC. It is for the EC to find the right balance between supervisory considerations and industry concerns.

In this regard, it is important to keep in mind that things have fundamentally changed since Solvency II was developed at the beginning of this century.

Secondly, there is the political agenda: economic recovery after the pandemic and an ambitious climate agenda. Both objectives call for a stimulation of long term investments. It would not be responsible to lose the opportunity of the first major review of Solvency II for making those changes in the solvency regime that help insurers to focus their investment portfolio on investments that contribute to addressing important challenges, such as achieving economic growth and technological innovation, addressing climate change and the aging society. Promoting long term investments without ignoring or underestimating the risk of these investments is the way to go.

Finding appropriate solutions will not be easy and I am sure that the EC's proposals will only be a start for a difficult negotiation in the Council and in the European Parliament.

There is also a need to address the complexity of the regulatory framework. That means finding a better solution to address proportionality. Proportionality should be a right for those insurers that are less complex. They should not have to justify themselves before they can apply less complex requirements.

Attention must be paid in this reform to avoiding an excess of prudence. It is understandable that supervisors want to operate a prudent solvency regime. After all, the objective is the protection of policyholders. On the other hand, a regime that is overly prudent leads to higher premiums, which is not in the interest of policyholders. It would therefore be good to have another look at some calibrations, for instance for real estate, for long term investments (both in equity and debt instruments) and at the formula for the calculation of the risk margin, which is rightly seen as introducing excessive prudence.

Personally, I do not see the urgency for introducing macro-prudential tools in order to address systemic risk. I understand that EIOPA wants the EU to adopt a solution for recovery and resolution that is in line with the Holistic Framework for macro-prudential supervision introduced by the IAIS. I would however prefer a gradual introduction of these new requirements and a strong dose of proportionality.

Equally on Insurance Guarantee Schemes, I do not see an urgency to introduce this now. It is true that it is unfair that policyholders in the EU are treated differently, depending on whether they bought the policy from an insurer based in a Member State that has a back-up protection scheme. There have been a number of insurance failures that have shown the disadvantage of not having a back-up regime in favour of policyholders in all EU member states.

However, even the introduction of minimum harmonisation in this area is not evident, particularly in the case of free provision of cross-border services or in the case of branches. As the creation of an internal market is a key objective of the EU, it is important to ensure that cross-border supervision works well and that there is a good co-ordination between home and host supervisors: prevention of failures is always a better remedy than a pay-out after the crisis.

For me, the Solvency II review will be a success when it goes beyond the correction of technical imperfections. This review should make it possible for the insurance industry to do better, to make a real contribution to a more sustainable society and to address the still existing protection gaps. This will require courage of all parties concerned.

As for the timing of this reform, it is unlikely that the new regime will start before 2025. I would however not exclude that parts of the reform will have an earlier start. There is great political pressure to use the investment potential of the insurance industry for supporting the EU's ambitious environmental and capital market goals. The pressure will increase once the crisis resulting from Covid-19 will be less prominent.

STORY LAB with Mariusz WICHTOWSKI: the Green Card system is the most successful international insurance organization at this moment

KAZAKHSTAN: over the past five years, insurance sector's assets have doubled

GERMANY: 75% of claims settled in the first year after Bernd; lack of resources in reconstruction delays the rest of payments