9 June 2022 — Marina MAGNAVAL
The National Bank of Ukraine (NBU) published a report on the non-banking sector for 2021, comprising 4Q2021 data on the insurance sector. The report is based exclusively on those insurers that submitted reports to the NBU as of May 16, 2022 (90% of non-life insurers and all life insurers).

Volumes of assets and GWP in the 4Q2021 of life insurers grew and paid claims increased almost 20%. During 4Q2021, assets, GWP and non-life insurance payments decreased, mainly due to non-reporting by several companies and exclusion from the register. Share of voluntary insurance increased over the quarter from 70% to 76%. Motor insurance and personal insurance (health and life) were traditionally the largest segments.

Loss ratios of non-life insurance decreased during the last quarter. Rapid reduction of losses in voluntary insurance was caused by settlement of a significant insured event by one company. Besides this case, the loss ratio did not change noticeably. Moderate reduction in losses in compulsory insurance took place due to some reduction of reserves.

Non-life insurers improved their operational performance efficiency over the year, most notably in the last quarter. The efficiency ratio reached 79%. Combined ratio decreased to 84%. This was significantly influenced by the fact that companies that report regularly are historically more efficient. Also, companies were able to almost double their investment income and thus reduce their operating activities ratio to 80%.

Life insurers increased investment income throughout 2021. Last quarter only confirmed this trend. Income from investing in government securities continued to grow, while revenues from deposits decreased significantly reaching 0.5% of insurance reserves. Life insurers increased profits at a steady pace during the year. Profitability decreased slightly compared to previous years. According to the results of the last quarter life insurers remained profitable. As of the end of December, four insurers did not meet the solvency and capital adequacy requirements. By assets these companies occupy 2.7% of the market.

In 2021, there was a gradual decrease in the volume of voluntary insurance reserves. Ratio of reserves to net paid claims decreased significantly in the last quarter due to increased payments. Compulsory insurance reserve ratios changed slightly during the year, the NBU said in the report.

Number of insurers and their assets, UAH billions 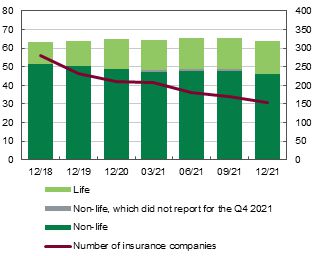 Premiums and ratio of claims paid* by type of insurance, UAH billions

* Insurers that did not submit reports for Q4 2021 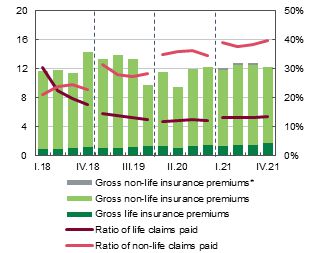 Note: Q4 2021 indicate the growth rates for companies that submitted reports for Q4 2021 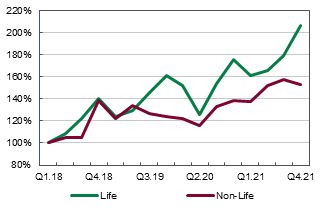 Note: Based on data from companies that submitted reports for all periods of 2021. Compulsory MTPL, Green Card 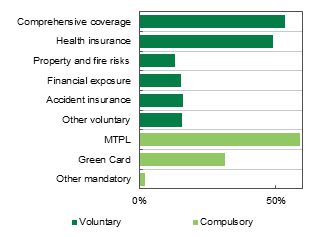 UKRAINE: for 9 months TAS paid out over UAH 675 million

UKRAINE: Kirill Shevchenko dismissed from the post of Chairman of the National Bank of Ukraine

Christos Adamantiadis is the new CEO for Continental Europe at Marsh

Generali confirmed among the most transparent companies in digital communication